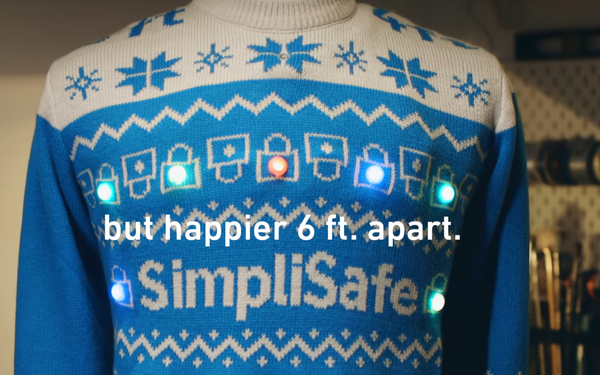 SimpliSafe gives the ugly Christmas sweater a 2020 update, stitching in sirens and warning lights to remind loved ones to stay six feet away.

The home security brand says the idea builds on its mission to keep people safe. “There’s a lot of stress around this particular holiday season,” says Wade Devers, creative director for the Boston-based D2C company. “And we wanted to find a way to grow brand awareness with a little bit of light-heartedness.”

He says the idea came from agency MulleLowePR. “And it’s the kind of activation we love -- it’s just not complicated.”

First, the team made a sweater prototype, which includes motion-detected lights and a siren. “And for the more analog among us, it’s also got measurements marked along the shoulders,” Devers tells Marketing Daily.

The sweater builds on the brand’s image as protection experts -- “and we just wanted to address the angst of the season in a way that made people smile.”

The opening scenes of the spot focus on tiny plastic people, dutifully face-masked for the holidays. “Sometimes the best ideas come from being on a budget,” Devers says. And while the figures were meant to save money, “those little miniature scenes and Christmas dioramas are such a familiar part of the holidays in so many families.”

The actual electronic sweater isn’t for sale, although the company offers instructions for a DIY version on its site, so those with the ambition can technify their own sweater.

People can buy the analog version of the branded sweater by donating to NeighborWorks America. Proceeds go to the Rental Resilience Fund, which helps keep those impacted by COVID-19 safe in their homes.