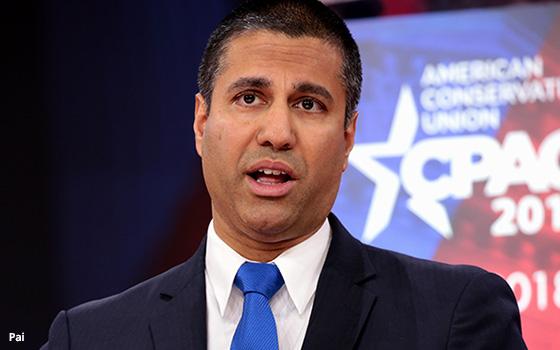 In an interview for C-SPAN's “The Communicators' series,” Pai said there wasn't enough time to complete the necessary administrative procedures before President-elect Joe Biden takes office. Pai previously said he will leave the agency on January 20, the same day as Biden's inauguration.

In October, Pai said the FCC would consider issuing regulations to “clarify” Section 230 of the Communications Decency Act -- the 25-year-old law that protects internet companies from liability for decisions about how to treat content created by users.

Pai took that step after the President Trump issued an executive order directing the Commerce Department to petition the FCC for rules to limit tech companies' immunity when they restrict or remove users' posts without a "reasoned explanation.”

But numerous outside commentators and legal experts, including Section 230 authors Sen. Ron Wyden (D-Oregon) and former Rep. Chris Cox (R-California), have said the FCC has no authority to craft regulations implementing the law.

Section 230, dubbed “The Twenty-Six Words That Created the Internet” by law professor Jeff Kosseff, immunizes online publishers from liability for speech by users. Without that protection, Facebook, Twitter, Yelp and YouTube could face endless lawsuits by people who said they were defamed in comments on the platforms.

Section 230 also immunizes companies from lawsuits for removing or placing warning labels on users' speech -- including comments that violate the companies' editorial policies. (Even without Section 230, companies have a First Amendment right to decide what type of speech to ban from its platform. But litigating a First Amendment issue can be more complicated and expensive for companies than obtaining immunity under Section 230.)

Trump's executive order regarding Section 230, issued in May, came shortly after Twitter alerted users that his posts contained dubious statements about voter fraud.

Trump, along with other prominent conservatives, has repeatedly claimed without proof that tech companies suppress right-wing views more than liberal ones. He later called for Congress to repeal Section 230.

While Congress didn't act on calls to either revise or repeal Section 230 last year, some lawmakers from both parties have said they plan to revisit the topic this year.