Simpli.fi Powers Through Pandemic With Surge In Addressable Programmatic 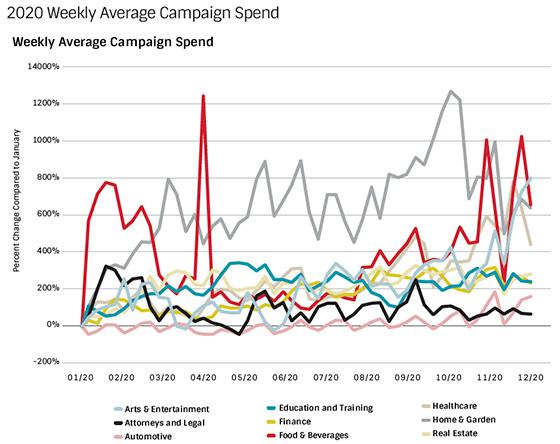 Advertisers spent 375% more for addressable geo-fencing on the Simpli.fi platform throughout 2020 compared with the prior year, accelerating mostly during the first two months and toward the end of the year.

Despite a slowdown between February and April, advertisers allocated more budget at the beginning of Q2 to reach consumers as they sheltered in place. The use of the technology peaked in October due to increased political ads. By the end of December, spend on Simpli.fi’s platform rose by 173%, an 83% year-over-year (YOY) increase.

The analysis of the company’s platform from January 1, 2020 through December 31, 2020 identifies several key trends around what advertisers experienced when using over-the-top (OTT) and connected television (CTV) advertising. It also provides a look into what is to come in 2021.

Ryan Horn, SVP of marketing at Simpli.fi, believes the trend in positive growth, even during an economic downturn, illustrates advanced targeting and attribution helps advertisers drive strong return on investment from their ad spend

Aside from the increases promoted by COVID-19, political digital advertising also played a role. Political digital ad spend, overall, reached $1.5 billion, as advertisers turned to digital to educate voters and drive them to the polls.

Using addressable programmatic, advertisers managed to precisely target voters based on their location. Spend for addressable geo-fencing reached a high of 13,873% in October, just prior to the general election in November, compared with political spend in January.

Spend rose as Simpli.fi experienced an increase in number of advertisers and campaigns using addressable geo-fencing throughout 2020.

As consumers continued to stay home during Q2, the number of advertisers grew by 112% at the end of December, up 144% YoY. This resulted in 12,939 advertisers using the technology on the company’s platform.

The number of addressable geo-fencing campaigns also rose. The number climbed 128% to 69,052 campaigns by the end of December compared with the beginning of January, which saw a 151% YoY increase.

Using its data, Simpli.fi also analyzed nine of its top industries to see how the company’s partners adopted addressable programmatic strategies throughout the year.

Most of the nine increased their ad spend. Some categories, including Attorney and Legal, declined in spend. Arts & Entertainment spiked at the end of the year, whereas Home and Garden rose dramatically around October and then fell as the colder months came. Other categories analyzed include Healthcare, Automotive, Education & Training, Finance, and Real Estate.