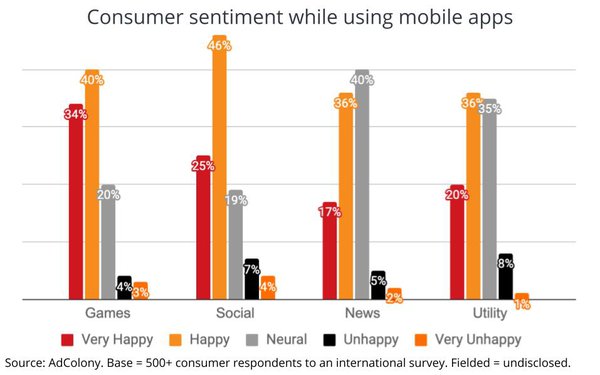 Mobile advertisers looking to target consumers in an environment -- and mental mindset -- when they are happiest would do well to serve their campaigns in game and/or social apps. That's where consumers said they were happiest, according to a survey fielded recently by AdColony.

When it comes to using news and/or utility apps, however, consumer happiness was, well, not so much.

The findings may not seem so surprising given that game and social apps often, you know, gameify consumer experiences with reward mechanics -- sometimes including actual tangible rewards -- while news and utility apps merely render a needed service, albeit a fairly neutral one.

On that latter note, I think it's worth focusing on the other end of the sentiment spectrum: What makes mobile users most unhappy? And while the survey is based on self-reported findings, and the statistical significance of these responses may seem marginal, I think it's worth noting that the most unhappy app environments are -- in this order -- social, utility, news and games (tied).

Given the kind of news most consumers have been accessing recently -- especially political and social turmoil, a deadly global pandemic, economic devastation, and a general undermining of versions of reality -- it's striking that news apps don't make people even more unhappy.

That may be because news has become somewhat gameified itself -- especially the political extremist/conspiracy-prone kind, which some researchers believe many users engage with not for ideological reasons, but as a diversionary form of entertainment.

While the alt-reality nature of social and -- obviously -- games can be characterized similarly, I think it's remarkable, and maybe even a little dangerous, that more people don't say they are unhappy when using mobile news apps, given how much unhappiness is actually being reported.

I chalk all this up to an even greater problem that all of these genres, with the possible exception of utilities, may be contributing to: the great desensitizing of society.

Studies going back as far as I can remember have shown that the incessant consumption of media containing alarming content, especially focused on factors like violence, leads to a desensitization of its users.

Call it the "Being There" factor, but there's something in the way our brains are wired: If we are exposed to bad things over and over again, we adapt by normalizing it.

But since this is a Mobile Insider column, and not a Red, White & Blog, I'll spare you the political commentary about gaslighting and the weaponization of media to disseminate disinformation, and focus on the original intent of AdColony's study, which is: What does this mean for advertisers targeting people in mobile app environments?

The bottom line is, if you feel people's self-reported perceptions about their moods matter, you might want to avoid reaching them in places that make them unhappy. Or, if you're a product or service providing a solution for said unhappiness -- say a pharmaceutical company -- you might want to focus on these environments. It all depends on how you want to influence people.

Of course, I'd much rather see some solid neuromarketing research to back all this up. But these are my self-reported responses. 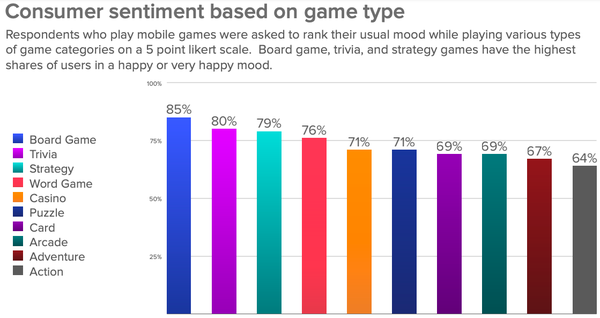