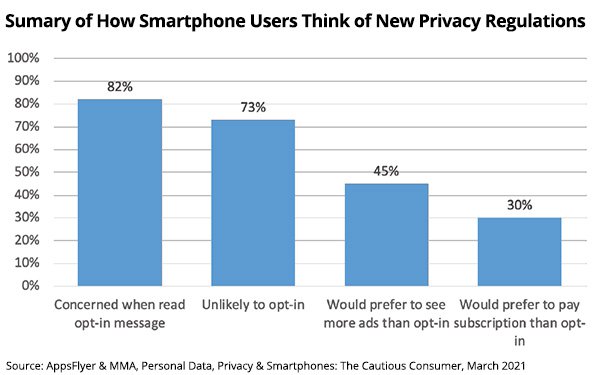 With Apple expected to make tracking changes soon, a survey finds that less than one-third of smartphone owners are aware of Apple’s privacy changes. Most understand that advertising and data sales enable free apps, but data shows the majority are not likely to allow tracking, indicating that app developers need to implement workarounds.

What will happen when Apple users encounter that pop-up on a device when privacy regulations go into effect? On average, 47% will not allow tracking, while 67% of those age 65 and older will not allow it. Some 21% of those 35 to 45 said they are very likely to allow it, according to survey results released this week.

AppsFlyer, a global attribution provider, partnered with Mobile Marketing Association Global to survey consumers about the implications of privacy-related updates such as Apple’s iOS 14 IDFA changes that include consumer opt-in for permission for marketers to track online behavior.

It also examines the larger issues around privacy and their smartphone data. This study is a follow-up to a survey of marketers conducted in September of 2020, about how they were preparing for the loss of data due to Apple’s impending privacy changes.

Some 1,500 surveys were completed by U.S. consumers age 13 and older who own smartphones. The survey was fielded from February 5 through February 17, 2021.

The report’s findings support switching to new more privacy-compliant modes of targeting and attribution, such as probabilistic, and helping consumers understand the value proposition of data sharing.

Older groups are far more likely to be concerned about data privacy, with 38% of those 65 and older “extremely concerned,” and 41% of those 18-24 “moderately concerned.”

While one-third will not allow tracking under any circumstances, the majority will allow some form of tracking rather than pay a subscription fee.

There is a disconnect in how people think companies use their data, with 39% agreeing that the sale of their data was to make money and just 14% agreeing it was to improve their experience or deliver more relevant content.

Smartphone owners are divided in terms of how confident they feel to make a decision about tracking, and think big tech needs to step in and provide more education.

Most smartphone users understand the negative consequences of not allowing tracking, which are ads that become more repetitive and less relevant, but 45% still prefer to not allow tracking.

The most sensitive data includes income and financial information, at 42%, followed by address at 38%.