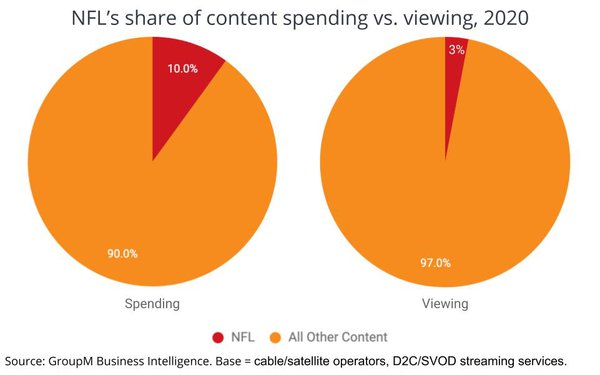 "It’s Amazon’s world, and other rights holders are living in it," GroupM Business Intelligence Global President Brian Wieser wrote in an analysis of the new NFL rights deals he sent over the weekend.

His analysis -- which focuses on the first wave of announcements of the league's new $100 billion-plus deals -- is significant, because it suggests the new NFL rights deals may significantly impact the shape of the ad-supported video industry in the U.S. and markets around the world. Mainly because it brings the alternate economics of streaming services into the equation.

"To Amazon, the value of its rights is heavily weighted to indirect sources," Wieser notes, estimating that Amazon's NFL licensing fee probably doesn't even equal half of what Amazon expects to recover from the investment.

"More critical to Amazon is that exclusive access to content of this nature allows the company to persuade some consumers to become new subscribers to Prime and prevent churn for others," Wieser explains, adding: "Amazon assesses the value of investments by estimating its contribution to the company’s overall profitability. So long as the NFL rights bring new subscribers or new purchases to Amazon that would otherwise occur to the degree that offsets content costs less direct advertising, they could find significant value in these rights."

Of course, the concept of utilizing NFL rights as a loss leader to build alternate economic streams isn't entirely new. To a certain extent, cable used the NFL's draw to attract and/or prevent churn among cable subscribers, as did satellite operator DirecTV.

While DirecTV -- and for that matter Verizon -- were not part of the initial new NFL rights announcement, they will likely be disclosed soon.

But the most interesting part of the new deals are how they impact streaming services.

Coming at a time when many Americans already are cutting cords in favor of streaming, the new NFL deals likely will only accelerate that trend, including Fox's ad-supported streaming service, Tubi.

But it is Amazon's end goal that Wieser highlights, because it introduces a new dynamic into an economic equation that was already distorted. Consider this, he notes -- that in 2020, the NFL accounted for 10% of all professional content licensed by the TV and video industry, but it represented only 3% of total viewing.