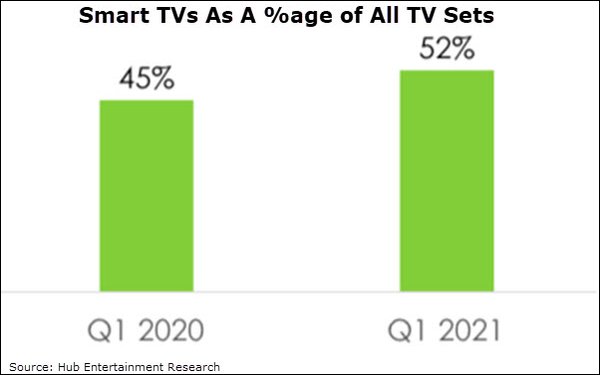 Seventy percent of U.S. TV households report having at least one smart TV, and smart TVs account for 52% of all TV sets in households, on average -- up from 45% in 2020.

In addition, more than half of smart-TV homes report having a smart TV with a Roku or Fire TV operating system built in, according to the latest connected-home report from Hub Entertainment Research.

All of which translates to a critical mass of TV sets that don't need other devices to connect to the Internet to stream, interact with or receive addressable advertising.

The results show that homes with kids or younger adults are more likely to own smart TV sets. In households with children under 18, 59% of all sets are smart TVs, and in homes where the oldest person is under age 35, 61% are smart TVs.

Voice control also continues to grow, with 44% of TV households reporting having at least one remote with that capability, versus 31% in 2019. These remotes are still used mainly for content discovery. If smart speakers are also counted, half of homes use voice commands to control at least one TV set.

At the same time, 40% of households report regularly watching premium content on a phone -- up from 35% from 2019.

That in part likely reflects the higher proportion with unlimited data plans: 64%, versus 56% in 2019.

More users also described streaming on phones as "very easy," and more rated the experience as "excellent," according to Hub.

Net ownership of all other smart home devices also grew, from 33% to 43%.

Ownership of augmented reality devices is unchanged from 2020, at 8%.

With gaming being the application used by 72% of VR device owners, VR/AR "seem destined to appeal only to small niche markets," in Hub's view.