Are You Ready For Some Inflation? 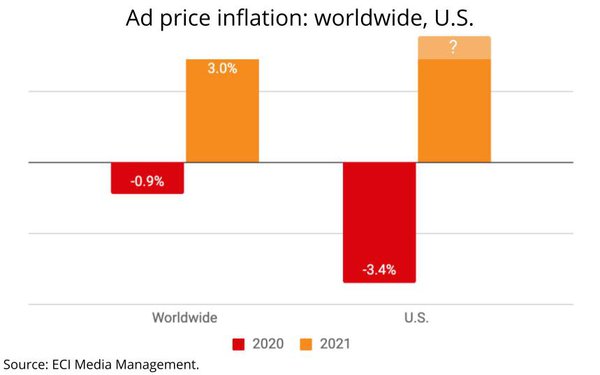 The good news is that coming out of a global pandemic, demand for many goods and services is expanding. The bad news is that inflation may be too.

This appears to be a serious concern for most hard goods and many consumer service industries as so-called "input" prices -- the cost of raw materials -- begins ticking up, but given the early indicators for the advertising economy, some leading prognosticators are already signaling an acceleration of advertising costs across media.

There are a variety of macro factors to base this on -- including the depletion of many raw materials during the pandemic, and the anticipation of higher corporate taxes in the U.S. -- and micro ones like accelerating rights and licensing costs for some major media content like the recent NFL deal, as well as pent up demand for many major advertising categories ready to expand coming out of the pandemic.

We've already seen a signal of that last point in the monthly data from Standard Media Index's U.S. Ad Market Tracker, which just reported the best March ever -- up 25% over March 2020, and significantly, up 7% over March 2019.

How much ad prices actually inflate remains to be seen, but coming off a year (2020) in which global ad prices fell 0.9% and U.S. prices fell 3.4%, it looks like the ad economy is poised to push prices to record levels.

Keep in mind these are overall ad-price estimates. If you look within the most resilient, high-demand pockets of the ad economy, hyper-inflation has already been taking root.

Take Facebook, as an example. Based on its ad-price data through mid-March, the social network's advertising costs had been tracking up about 30% over the same period in 2020. Needless to say, much of that price pressure has come from ecommerce brands that were resilient to, or maybe even benefited from the effects of the pandemic. But with more general ad categories poised to make up for lost time, it may be wise to hedge on surging ad costs.

This of course bodes well for TV networks, as well as digital suppliers in the upcoming upfront and NewFront marketplaces. And it bodes well for high-demand media that have experienced a contraction in their supply of human impressions, such as digital out-of-home media, especially cinema advertising.

"Input inflation is rising for marketers, and so are prices for consumers," GroupM Global Business Intelligence President Brian Wieser writes in his "Global Marketing Monitor" report this week.

Wieser also suggests in interesting hedge scenario, which may have more appeal for marketers outside the U.S.
"A lack of sufficiently high inflation in certain sports rights fees could produce opportunities for marketers," he explains, noting, "One place where inflation has not played out as some would hope is in television rights fees for top tier European soccer."
Specifically, Wieser cites the apparent failure of Europe's top teams to form a new "Super League" to maximize rights negotiations.
"As a result, if there is an upside to the failure of the Super League to establish itself, marketers may find that some teams will be more open-minded to finding ways to work together," Wieser explains. "Clubs that have not yet set themselves up to maximize related opportunities may consequently invest more resources in developing themselves as commercial operations and find new ways to help connect brands to culture through the lens of the sport." 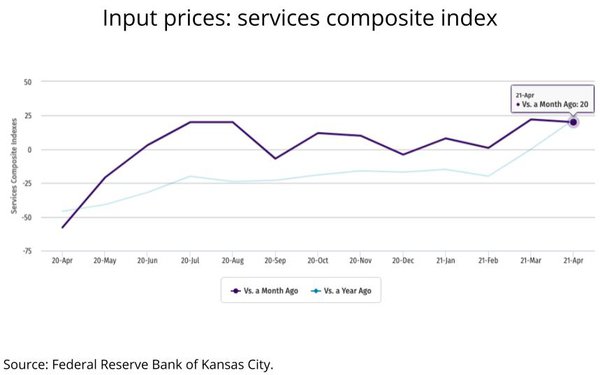 advertising, consumer, covid-19, digital, ecommerce, economy, forecast, research
1 comment about "Are You Ready For Some Inflation?".
Check to receive email when comments are posted.
Next story loading