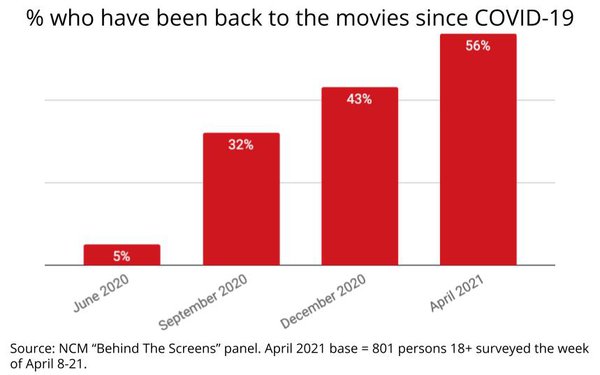 Two weeks before the unofficial start of summer, the cinema advertising industry is preparing for a strong -- if not blockbuster -- Memorial Day weekend, following last week’s guidance from the CDC that fully vaccinated Americans can return to indoor public places without their masks.

The weekend also marks the first that the U.S. cinema advertising audiences will be measured via the industry’s new ad currency, Epicenter Experience, which replaces the one Nielsen shut down last fall, giving the industry a much-needed boost following what likely has been its worst year ever.

According to the last major update by an agency holding company ad-forecasting unit, Dentsu’s January update, cinema ad sales plummeted nearly 60% in 2020, making it the medium worst hit by the COVID-19 pandemic.

While Dentsu projects cinema ad spending will rebound 42% this year, the U.S. cinema advertising industry is hoping it can beat that based on pent-up demand from both moviegoers and advertisers who want to reach them.

Even before the CDC’s new guidance, proprietary tracking studies by the two big U.S. cinema networks -- National CineMedia (NCM) and Screenvision -- indicated that loyal moviegoers have already gone back to the theaters.

According to the seventh wave of post-COVID-19 pandemic tracking of its “Behind The Screens” moviegoer panel, more than half -- 56% -- say they have already gone back to the movies -- up from just 5% in June 2020, when it first began asking that question.

An April survey of Screenvision’s “Real Movie Fans” loyalty panel found that 76% have been back to the movies since the COVID-19 pandemic began.

“It’s a real interesting nexus for us,” says Doug Pulick, a long-time media industry researcher who just retired as senior vice president of strategic insight and analytics at NCM, who presided over seven waves of NCM’s pandemic tracking studies.

“We have the new Epicenter research starting and there's two years worth of major movies being released in one summer,” he said, adding that while even he and his wife were still little perplexed by exactly what the new CDC guidance means in terms of mask-wearing and safety in public indoor places, it's good more good news for the cinema ad industry because it will overcome reticence from people who are not necessarily the diehard fans who have braved the pandemic to date.

Pulick, who will remain a consultant to NCM for a while, and Sheila Farina, director of custom research at NCM, will take over the tracking study.

Meanwhile, the team at Screenvision are equally buoyant about a U.S. cinema advertising rebound.

“Just like Hollywood scriptwriters like to write about, we are having a comeback story of our own,” Katy Loria, chief revenue officer at Screenvision, told me during a recent Zoom meeting with her research team, which was armed with equally upbeat findings from its proprietary loyalty panel.

While those fans many not necessarily be representative of the general moviegoing public, Loria and her research colleague Sarah Barasch, senior vice president-insights and measurement at Screenvision, shared some other important data for advertisers and agencies -- including the fact that people returning to the theaters are getting their earlier, pre-ordering concessions, and spending more time in their seats before the films start.

While it is a little bit of an apples-to-oranges comparison, Barasch said that looking at the difference between some of Nielsen's older data and recent numbers from Epicenter, it looks like there has been an average increase of about five minutes in the amount of time moviegoers are in their seats before the films start.

That's important for both Screenvision and NCM, because the majority of their most premium advertising inventory is in their pre-show content that runs on the screens before the films start.

While it's unclear whether these moviegoing patterns will sustain themselves as consumers adjust to post-pandemic life in public places, Screenvision's Barasch said their reason to believe consumers will continue to spend more time in their seats, because of the convenience of using apps to pre-order tickets and concessions, which means they will spend less time in the lobby or milling around the theater. 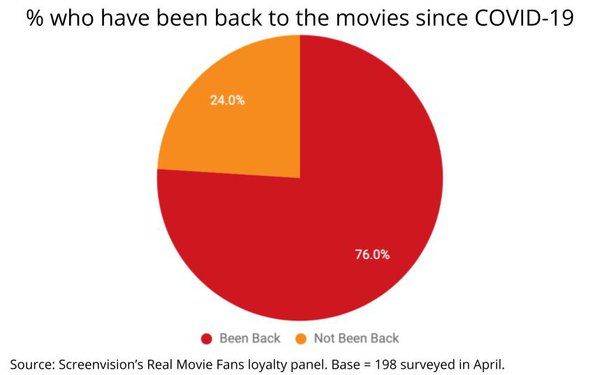