Havas Finds Growing Consumer 'Cynicism,' Only 25% Of Brands Even Matter 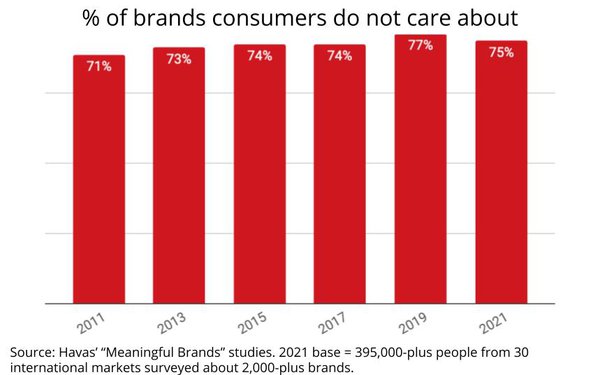 After reaching an all-time high of 77% when it released its last global study in 2019, the percentage of brands consumers say they can live without has declined to 75%, according to the 2021 edition of Havas' every-other-year "Meaningful Brands" study.

The study, which is based on surveys of hundreds of thousands of consumers evaluating more than 2,000 brands across 30 countries, has been released every two years since 2011, when the average percentage of brands consumers said could "disappear" tomorrow was 71%, but it rose steadily until this year.

It's unclear why the percentage has declined, because there are more brands than ever worldwide, thanks to digital media and the ability of direct-to-consumer brands to launch and compete with the world's most established ones.

While there doesn't appear to be a sense of the global brand population, this reporter's own tracking since the early 1980s indicates the number of national brands (using TV) rose from 200 in 1983 to 4,000 in 1989. Today, there are more than 10 million brands worldwide, based on smaller advertisers reaching consumers through platforms like Facebook and Google.

While Havas' Meaningful Brands study doesn't claim to represent the indispensability of all those brands to consumers, the consistency of its global study provides a reasonable representative base for big brand marketers.

Interestingly, the percentage of brands that consumers can live without has been much higher in the U.S. for the few times Havas has released that stat. In 2011 it was 82%, and in 2017 it was 81%. At the time, Havas research executives said the reason for the higher percentage in the U.S. was partly cultural, but also because American consumers have so many brands available to them.

This year's report includes ample evidence of growing cynicism among consumers toward brands, including that 71% of people worldwide have grown tired of brands' "empty promises." In the U.S., consumers were a little more forgiving of brand promises, with 67% citing "empty" ones.

Asked what percentage of brands they actually trust, less than half (47%) of brands are trusted worldwide, but the numbers vary markedly by market, ranging from 24% in East Asia to 74% in China. In The U.S., consumers trust only 39% of brands.

As part of its report, Havas typically ranks the world's "most meaningful" brands, and once again Google ranks No. 1 (see bottom). 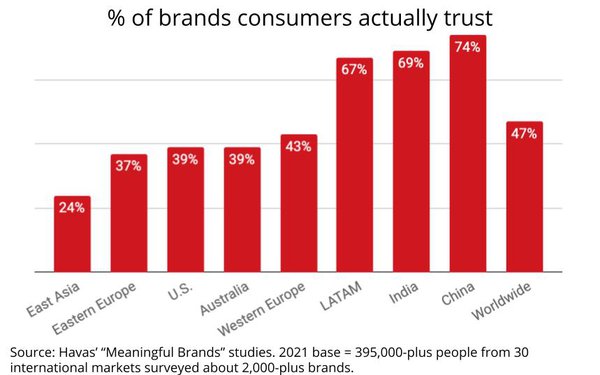 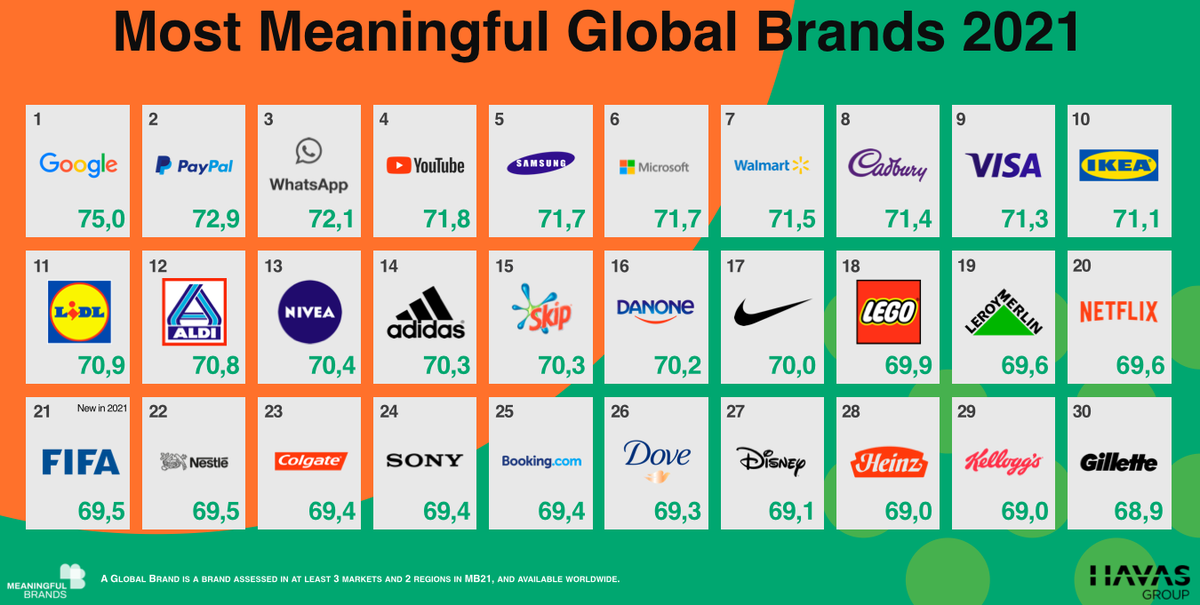