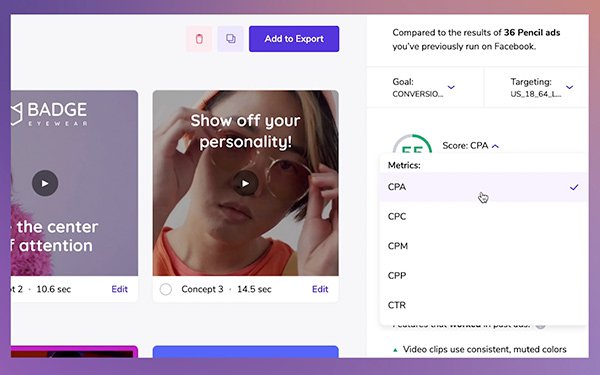 Pencil, backed by several influential investors, has launched an ad-creation platform that learns from historic ad performance to generate new creatives, which is already being used by Sephora, L'Oreal, and Unilever.

Now the company is launching a service for small businesses and startups.

Creative design and advertising optimization have become more important since Facebook recently reported a 46% jump in revenue during Q1 2021, compared with a year ago, attributed to a 30% increase in the average price per ad and a 12% increase in the number of ads displayed.

It means brands must work harder, and pay more, to get better results from their ads.

Pencil was founded in 2018 by former Google, Facebook and Uber employees, and also backed by Wavemaker Partners, Singapore Innovate, and Entrepreneur First.

Kelly Burke -- head of marketing at Bravo Sierra, which makes military-first wellness products such as soaps and deodorant -- also now uses the platform after running a competition with her four-person team, from email and SMS, to performance and influence.

The competition required all participants to use Pencil, which relies on artificial intelligence to machine generate ad concepts, copy and video ads. During the competition, every person on the team created five ads uploaded to Facebook, targeting the same audience with the identical budget. The winner got $500.

“The newest person on the team, the one who probably knows the brand the least who runs influencer, the furthest away from performance marketing, won,” Burke said. “I think it’s because she came in without bias and added [images and copy] she thought was cool.”

The trials identified how the technology could create slogans and copy from buzzwords and important keywords without having to put together the ads.

Bravo Sierra began working with Pencil about three months ago. The company ran performance marketing in-house, but it became a bottleneck because it began launching so many new products, focusing on packaging and a new website.

That left the Sierra Bravo Sierra team without much time for new iteration in terms of Facebook and Instagram copy. Rather than bring in an agency, which takes a long time to vet, Burke wanted to find a technology that would let her and the team take control of the process.

Here’s how it works. Advertisers add imagery, videos and copy into Pencil. The technology platform uses AI GPT-3 to create the copy and concepts, and then builds different versions of the video ads that marketers can test.

“The first time I played with the platform it took me about 45 minutes to upload images and write about 10 tag lines,” she said. The platform “takes the process of creating the ad assets off my plate.”

The copy is created by artificial intelligence, and some of the tag lines and copy that emerged “we never really thought about,” Burke said, because mostly you stick to the pillars, the words that you’ve stuck with from day one.

“I’m a control freak, Type A, so I might not have not seen the beauty of letting the AI do its work,” she said.