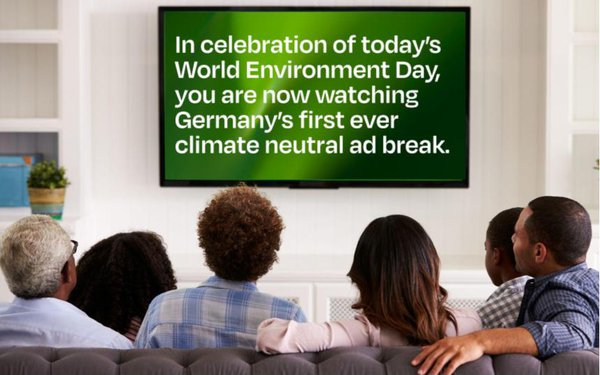 In recognition of World Environment Day, Munich, Germany-based agency Mediaplus Saturday will run what it calls the first "carbon neutral ad breaks" on television. The buys, which the agency dubs "green GRPs," will run on TV outlets in Germany, Austria and France, as well as addressable TV and radio spots in Italy and Switzerland.

The TV spots, which will run on outlets such as Germany's ProSieben, and include bumpers alerting viewers that they are watching the "first ever climate neutral ad break," and that all of the spots "have been CO2 compensated."

At the end of each ad, a tagline reemphasizes that the "CO2-neutralized" spots are "the first step towards climate neutral advertising."

The agency said the ad buys are being offset via an arrangement with ClimatePartner, a company specializing in managing carbon offsets. While they did not disclose details about how that would be done, they said the campaign utilizes a "calculation model" determining the individual CO2 footprint of each media mix and "the amount of offsetting required in relation to each climate protection project."

It was not clear from the announcement, released early this morning, whether the formula explicitly calculates a "green GRP" that could be utilized for media-buying and/or campaign optimization, but the effort appears to be intended to drive awareness of the concept vs. introducing a new ad industry metric.

"The green GRP works independently of the marketer and for all types of media," Mediaplus said in a statement, adding: "It is calculated specifically for each inventory used in a campaign placement."

Importantly, each of the carbon-neutral ad spots displays a "certificate number" intended to create transparency about the offset payments made to neutralize the carbon used in creating the ad and placing the media buy.

In Austria, they include Familienmolkerei Ehrmann, Schwabe Austria, simpli services, Capri-Sun, all i need, and Salzburgerland Tourismus.

In France, they include DeLonghi, Milleret, Qonto, Selency, Urgo and Twinings.

The agency did not say what impact green GRPs have on CPMs, or the cost of the advertising buys, but they presumably add incremental cost because of the need to purchase carbon offsets.

"As an agency, we see it as our duty to contribute to the climate neutrality of the advertising market. As a company, we are climate-neutral, and with the Green GRP we are also making our product, advertising placements, climate neutral," Mediaplus Group Managing Partner Andrea Malgara said in a statement, adding, "We are delighted to be able to use this idea to draw attention to this important issue, and would like to thank all the media partners who have made this possible”.