Guess Which Institution Is The Only One Consumers Feel Is Both Ethical And Competent? 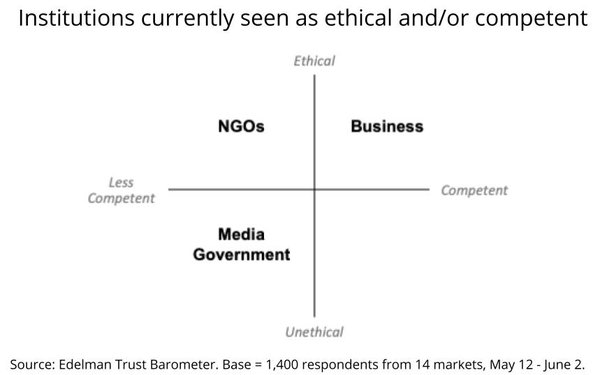 Lost in the shuffle of the remarkable brand and agency work being recognized at this week's Cannes Lions was a special edition of Edelman's Trust Barometer explicit for and released during the festival.

The study shows that brands -- well, businesses that create them, anyway -- are now the only institution that rates as both competent and ethical among most consumers. Not NGOs, not the media, and certainly not governments.

The finding is the latest progression of a shift in consumer perceptions of the role of brands in society that has been tracked by Edelman, and the past two years of multiple crises, has only accelerated people's beliefs that brands should -- and often do -- make the world a better place.

Certainly the work being recognized by this week's Lions festival embodied that, taking on -- and in many cases solving -- problems that governments, NGOs and other institutions have not been able to resolve. Whether it is Telenor's identity-giving birth registration app, or Starbucks notarizing transgender name changes, or Waterlight's renewable energy solution, or AVA's pollution-removing soap, winning brands have demonstrated an ability to step up and solve real human problems.

And I know much of this was stimulated by the multiple crises of the past two years -- the COVID-19 pandemic, Black Lives Matter, social injustice and inequity -- but there was a significant run-up of looming crises leading up to those, including climate change, and renewed threats to democracy.

A number of recent studies have indicated that last issue, which was once seen as being too political for brands to take a stand on, is now one many consumers expect brands to lead on.

I hope they do, because there's nothing more democratic than the free marketplace where people vote with their pocketbooks and personal endorsements for the brands that make a difference in their world. 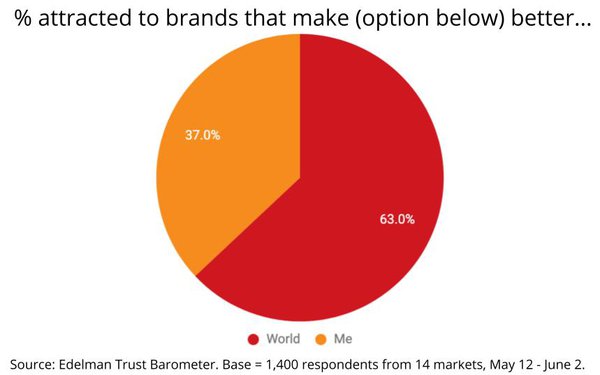