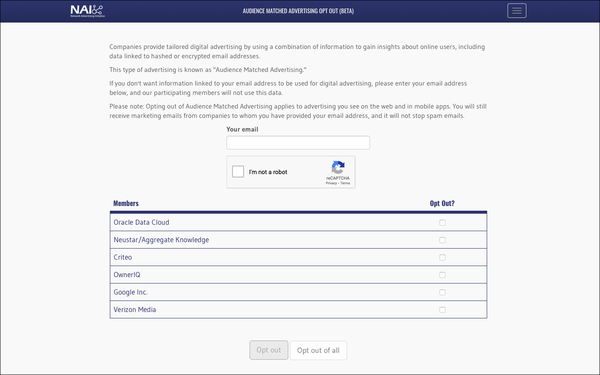 The Network Advertising Initiative (NAI), a nonprofit self-regulatory association dedicated to responsible data collection and its use for third-party digital advertising, has announced the launch of its email-based consumer choice offering.

The form can be found on its website. Consumers go to the website, enter their email address, and click on the “I’m not a robot” box, along with the member companies in which they wish to opt-out from.

Leigh Freund, NAI president and CEO, believes that any shift to hashed email addresses as identifiers must come with strong privacy protections, such as the NAI’s universal opt-out from tailored advertising tied to an email.

The integration allows consumers to opt-out from Verizon Media ConnectID with their email address, which gets added to Verizon Media’s privacy and people-first controls for targeted advertising.

The NAI’s plan is for members to continue focusing on consumer privacy when evaluating replacements for cookies and mobile ad IDs.

The announced deprecation of third-party cookies in the Chrome browser has presented challenges to traditional addressability methods, yet has spurred innovation from advertising technology companies. Some solutions propose to leverage hashed email addresses as a means to distinguish between various users and devices.

Developed initially to provide a choice mechanism for first-party data matches with online identifiers like cookies, the scope of the NAI’s email-based opt-out mechanism will expand to all use of hashed email addresses for tailored advertising, the organization said.