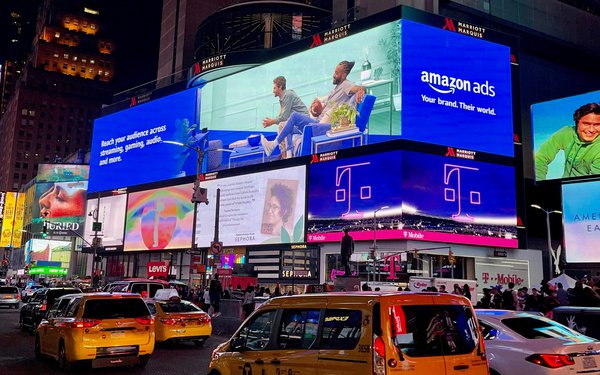 The campaign clearly highlights a shift in the company's name from Amazon Advertising to Amazon Ads -- joining its rivals Google Ads, and Facebook Ads in a natural nomenclature for the advertising industry.

Microsoft Advertising has not officially made the transition, but often marketers refer to the platform as Microsoft Ads.

Amazon Ad’s digital-first creative agency, Code and Theory, created the campaign to help advertisers gain a clear understanding of its services, as well as help brands reach and engage with customers, understand their audience, and plan, optimize and measure marketing strategies.

The campaign -- Your Brand. Their World -- leverages expressions and real-world consumer stories to reflect the limitless properties Amazon Ads can bring brands.

“Finding real consumer moments was critical in conveying Amazon Ads’ ability to help brands show up uniquely,” says Amy Carvajal, chief creative officer at Code and Theory. “We wanted to position them as the beginning of something better, building on the traditional advertising channels most brands still use today.”

Amazon has not disclosed its advertising revenue in a quarterly earnings report, but does bundle the ad group into the “Other” category. In its most recent earnings report -- the quarter that ended in June 2021 -- the company stated that revenue in the “Other” category rose 83% year-over-year in Q2 to $7.9 billion, “driven largely by continued acceleration in our ads business.”

Evan Walsh, senior strategist at Tinuiti, an agency that specialized in Amazon advertising, believes the company is trying to get brands to view them as something more than a “conversion engine.”

“Amazon understands it holds very valuable consumer data across all its properties, and based on different ad types the company built during the past few years, they want brands to understand the value of all that media, from lower funnel to targeting video assets like commercials,” Walsh said. “We’re not just talking about search advertising. We’re talking about first-party audiences, Twitch video, paring the audiences with OTT.”

The campaign weaves through multiple media, from mobile to streaming video. Amazon Ads found that campaigns running on mobile have delivered 300% higher brand favorability lift, compared with the industry average.

Clients in the past include 20th Century Fox’s 360-awareness campaign for Bohemian Rhapsody throughout the UK, the launch of Mitsubishi’s 2022 Outlander, and Mastercard’s match campaign with Stand Up to Cancer.

For Amazon Ads’ first global campaign, Code and Theory identified real-world consumer stories through that mapped Amazon Ads properties to a range of consumer needs and industries, from financial services, entertainment, and automotive, to teleco, hospitality industries, and more.

The campaign launched at the end of last week, but Code and Theory began working with Amazon earlier this year when it became the company’s agency of record. Ads are running in the U.S., UK, Germany, Canada, including French Canadian territories where they are translated into French.

Media buys include is a mix of display—programmatic and sponsored—, paid and organic social, out of home, video, audio, and search engine optimization.

Amazon Ads next week will host its annual conference. This year the formally named event AdCon also takes on a new name, unboxed.