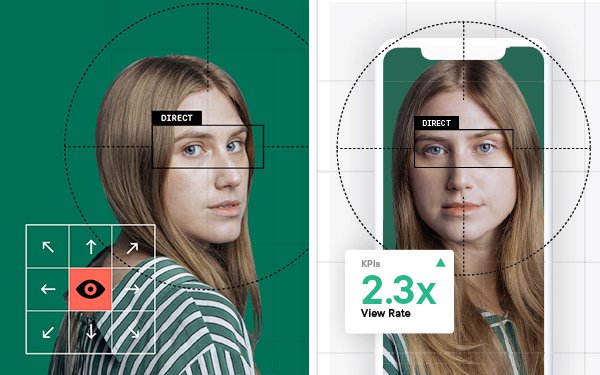 Advertisements need to captivate viewers to be successful. Sometimes that means looking into the soul of the consumer. VidMob analyzed ad creatives in key verticals where a model gazes -- meaning where the model looks either into the eye of the viewer or to either side. The gaze of the model leads to major differences in campaign performance.

The research, released today, shows that the direction of the gaze of an eye in the first few seconds of a video advertisement can significantly impact performance metrics, but also differ greatly based on context.

The company used its proprietary artificial intelligence (AI) technology to detect the specific direction of eye gaze and its relationship to ad engagement. The study found that the direction of the model’s gaze in an advertisement can influence how consumers react to the ad.

The findings of the study are based on an analysis of 1.1 million digital ads that ran on Facebook, Instagram, Snapchat and Google between January 2018 and December 2020. It shows variation in eye gaze can influence click-through rates, view rates and return on ad spend (ROAS).

The analysis considered how eye gaze during the viewability window, defined as the first three seconds of video on Facebook and Instagram and the first two seconds on all other platforms, correlated to ad performance based on the unique campaign goals.

The findings group the gaze into two categories -- direct gaze and indirect gaze. VidMob’s technology can capture up to nine different eye-gaze directions featured in creative: left, right, down, up, up-left, up-right, down-left, down-right, and straight.

The study focused on consumer product goods (CPG), retail, and entertainment. When an ad featured more than one person, the team treated each person’s gaze as separate.

The eye gaze influences creative performance, but the outcome changes over time. It is time sensitive. Direct gazes were associated with more than a 2.7% increase in click-through rate (CTR) across Facebook and Instagram in 2019 and 2020, but declining CTR and view rates on the same platforms in 2018.

The study also reveals that campaign objectives change how viewers react to eye gaze. Direct gazes were associated with more than a 1.47% CTR across all platforms, and minus 6.67% view rates.

Incorporating eye gaze into the visual narrative can positively influence the return on investment (ROI). Direct gazes were associated with higher click rates when brands looked to purposefully engage viewers in the dialogue, such as with educational and gaming content. Indirect gazes were seen to lift click and view rates for sports, lifestyle, and medical content. Notably, the study also found that pairing direct gazes with positive facial expressions had a beneficial impact on app installs.

This effect was more pronounced in 2019, when direct gazes were associated with 8% performance. This study used a sample size of 4522 video assets and 36,485,521,683 billion impressions.

The campaigns ran between January 2019 and December 2020.