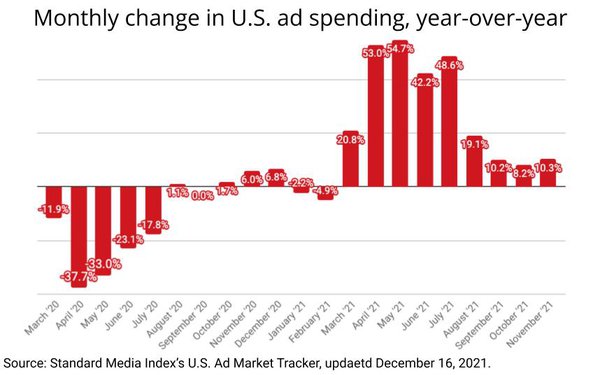 U.S. ad spending increased for its ninth consecutive month in November -- expanding 10.3% over November 2020, according to the just-updated U.S. Ad Market Tracker, a collaboration of MediaPost and Standard Media Index derived from actual ad spending processed by major ad agency holding companies representing most of the U.S. ad marketplace.

November was also the biggest month in aggregate spending in the five years span represented in the current index (baselined at January 2017), according to SMI Head of Insights & Analytics Rick Bruner.

November normally is the highest or just behind December as the highest-demand month each year in the U.S. ad marketplace, but the 2021 growth posts off of November 2020, which was also up 6%, despite being in the thrall of the COVID-19 pandemic.

The rebound is consistent with recent updates issued by Madison Avenue's Big 3 ad industry forecasters -- GroupM, IPG Mediabrands Magna and Publicis Media's Zenith -- all of which revised their 2021 and 2022 projections upward significantly.

While the U.S. Ad Market Tracker is something of a lagging indicator, it is based on a pool of empirical data representing actual media buys processed by the six holding companies and several big independents representing an estimated 95% of all national spending in the U.S.

In terms of specific media, digital continued to spur the most growth -- rising 17% over November 2020, while linear TV spending was down 1% year-over-year.

Out-of-home ad spending surged 84%, and radio climbed 23% vs. November 2020, signaling a strong sign that America has become more mobile over the past year.

Among the big media owners, SMI analysts noted that "Google markedly grew revenue last November and maintained the No. 1 share of ad spend, with 5% growth in November 2021 year-over-year. Travel, entertainment and media, and retail ramped up Google support vs. last year to drive the trend."

Ad spending on ViacomCBS fell 16%, as pharmaceutical, CPG and automotive scaled back on its outlets.