Time Spent With Ad-Supported Media Falls To 46.6%, Even As Ad Spending Soars 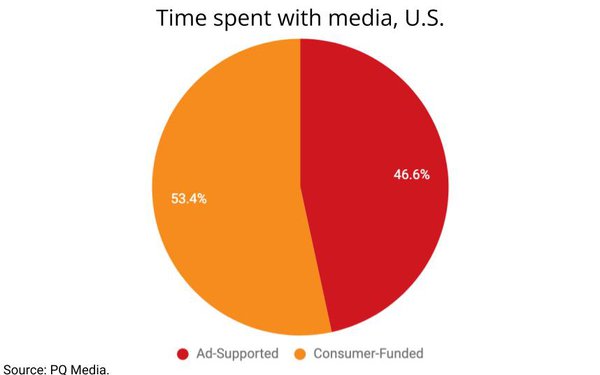 Ad-supported media's share of total consumer time spent with media fell to its lowest point ever in 2021, and is projected to continue falling over the next several years, even as spending by advertisers continues to rise.

That paradox, which is based on a MediaPost analysis of data from PQ Media's just-released consumer media usage forecast, implies a pronounced rise in ad cost inflation through 2025.

The new report -- part of a regular series of annual tracking studies produced by PQ -- estimates ad-supported media's share of consumer time fell to 46.6% in the U.S. in 2021, and to 54.6% worldwide.

Thanks to a rise in total time spent with media due to the COVID-19 pandemic in both 2020 and 2021, total time with ad-supported media actually grew, even as its share dipped -- but the effect has been relatively moderate and not nearly enough to impact the potential inflation of more ad dollars chasing fewer available minutes of advertising exposure.

In the U.S., for example, consumer time spent with ad-supported media rose just 0.01% in 2021, while total advertising and marketing spending jumped 8.7%, according to PQ's estimates.

"Historically, there has always been a disconnect between advertising and marketing spending vs. consumer media usage during recession and recovery periods," PQ CEO Patrick Quinn explains, noting: "When a recession first hits, advertising and marketing growth will typically decelerate, while media usage increases, because consumers tend to use media as a catharsis during difficult economic periods.

"Conversely, when an economic recovering begins, advertising and marketing spending will outperform GDP, while media usage tends to decelerate, because consumers have less idle time as they go back o work and such."

Quinn added that between 2020 and 2021 "the media usage gain was stronger than usual" due to stay-at-home protocols during the pandemic, while advertising and marketing declines were "steeper than usual."

The result, he said, was a corresponding deceleration of consumer time spent with media and an acceleration of ad spending.

While total consumer time spent with media is projected to continue to expand in both the U.S. and worldwide through 2025, ad-supported media's share will continue to erode due to secular, not cyclical shifts in consumer usage of media -- something other analysts and economists have been pointing out, including the Big 3 agency -- GroupM's, IPG Mediabrands', and Zenith's -- top forecasters during their year-end outlooks last month. 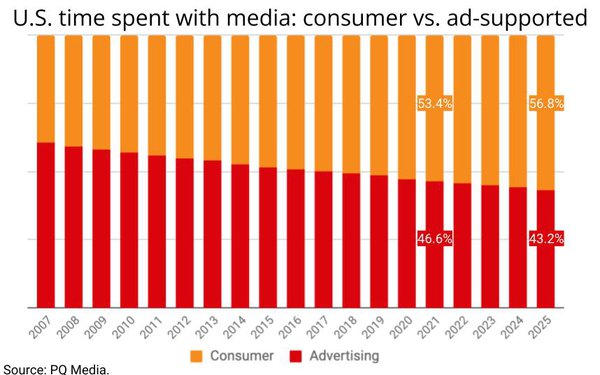 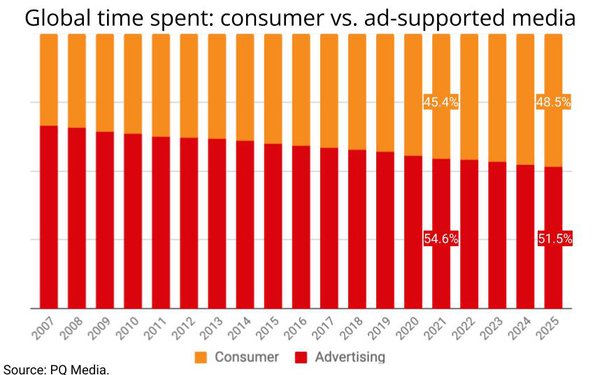