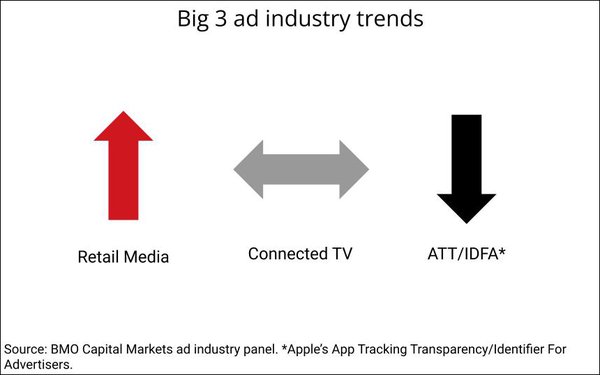 Retail media has overtaken connected TV (CTV) as the biggest trend on the mind of advertising and media executives heading into the new year, according to an ad industry tracking panel organized by the equities research team at BMO Capital Markets.

"Retail Media is eclipsing CTV as the No. 1 secular growth trend as 2022 begins," BMO analyst Daniel Salmon writes in a report sent to investors early this morning. The report singles out Amazon as the main beneficiary, but also cites Uber, DoorDash and InstaCart, as well as Criteo's acquisition of Iponweb, as "emerging businesses" likely to get a boost from the trend.
The report cites anecdotal evidence for retail media's ascendence, including the fact that GroupM's packaged goods clients have doubled their ad spending on the "top three retail media platforms in 2020, and ones again in 2021."
One major factor driving the shift to retail media may be the deprecation of cookies and other consumer identity trackers in digital media that began last year and will accelerate this year. The reason, Salmon writes, is that retail media's ability to attribute advertising effectiveness "against actual transaction data is very well suited to a digital world that is re-wiring attribution" as Google and Apple step up consumer privacy controls.
While CTV is taking a backseat to retail media, according to the BMO panel, it actually stands to gain long-term from that other "secular" shift.
"In all fairness, we believe CTV will also have its own retail media convergence over the course of the decade -- especially the back half -- as voice controls and shoppable advertising (lead by Amazon and YouTube) will take the concept of a home shopping network to an entirely new level," Salmon noted.