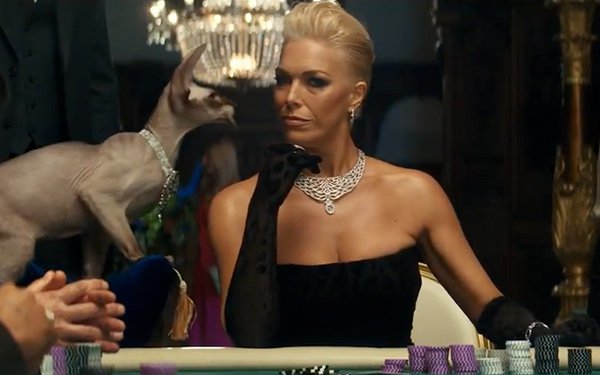 The 30-second and 60-second ads were created in-house and filmed at the iconic Hatfield House near London.

The ad campaign, High Stakes, features Hannah Waddingham as a high roller next to hissy cat Leonardo. She raises the stakes of a poker game against a savvy Rakuten shopper.

Leonardo jumps on the poker table just as the stakes heat up. Waddingham leans in to the cat to hear its whispers, then says: “Leonardo says it’s time to finish this.”

Waddingham raises the stakes with a pair of high-heeled glittery shoes. Her opponent matches the bet and adds a robot vacuum. Waddingham adds a smart 4K TV.

After going all-in with a variety of products, the shopper makes a power move and sweetens the pot by betting all the Cash Back she earned by shopping with retailers participating on Rakuten.

The ad also features “The World’s First Podcast” hosts Erin and Sara Foster, whose clothing brand Favorite Daughter is available to shop and earn Cash Back on Rakuten.

In addition, the Fosters will star in a 15-second spot that will run after the Big Game and highlight beauty and fashion shopping available through Rakuten.com and its mobile app.

Waddingham appeared on the Today show this morning talking about the two versions of the ad, her first Super Bowl commercial. Cha-ching.

Waddingham said she comes from a big family that loves Rugby. “When I was little, I had the Minnesota Vikings’ helmet and shoulder pads,” she said. “I had all the gear. And one of my first crushes ever was one of those chaps. I didn’t realize they weren’t real shoulders.”

The campaign follows a teaser video focused on branding that the company unveiled on its YouTube channel in January.

The 15-second preview foreshadowed by Waddingham. Her character rehearsed a maniacal laugh in the mirror.