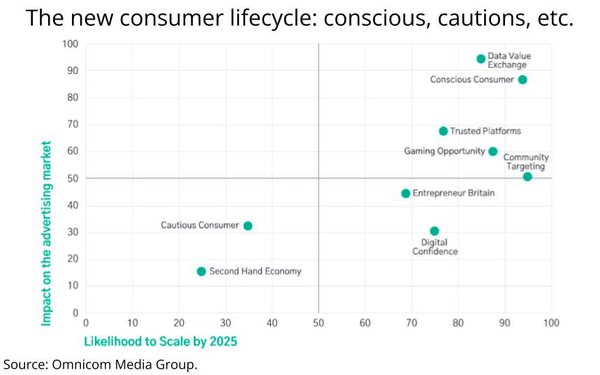 Omnicom Media Group UK has published a report that examines dozens of trends that are likely to impact marketers over the next three years. Among the most important, the Group finds, is the rise is conscious consumerism.

Concerned by the carbon and social impacts of their purchase decisions, conscious consumerism is reshaping supply and demand. Driven largely by younger demographics, these consumers are also more inclined to punish companies for poor corporate social responsibility standards.

The report notes recent research from yougov.com for example that found that over half of people in the UK would be more likely to buy a brand that stopped doing business in Russia given its unprovoked attack of Ukraine.

As the numerous companies that have already pulled out of the country seem to realize, businesses cannot afford to be seen to put profit over ethical standards by a growing number of consumers.

The report surmises that the significance of ESG will become a common marketing KPI by 2025.

The growing importance of first-party data, the convergence of media and commerce, and regulation are also identified in the report as some of the most significant trends to impact media investment and strategy over the next three years.

The report is titled Accelerate: The Future of Media, published by Omnicom Media Group UK’s Media Intelligence Unit. It was authored by Bhavin Balvantrai, chief market analyst at Omnicom Media Group UK, and analyses 75 evolving themes to predict which will rise to prominence by 2025, and how significantly they will scale.

Among the other trends examined in the report include the roll-out of 5G, the increasing importance of influencers in purchase decisions, and the growing role of voice-search in product discovery.

“We’ve taken a forensic approach, and input from a broad range of experts, to map the most significant emerging trends likely to impact consumption habits and business performance at a crucial stage of economic recovery,” says Balvantrai. “As the economy cranks back into gear, visibility of the key moveable parts is essential, so that decision-makers can identify which structural changes will matter to their organization, and where investment and strategy should be focused over the medium term.”