OpenWeb Buys Adyoulike For $100 Million To Build A Social Layer 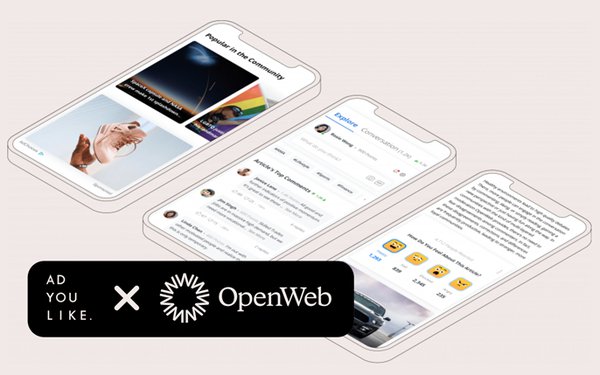 OpenWeb Technologies has announced the acquisition of Adyoulike, a global advertising platform based in France.

Acquiring Adyoulike will help OpenWeb to support publishers through first-party data and to build a social layer of the open internet -- “a parallel universe to the walled gardens that’s rooted in healthy conversations, transparent first-party data relationships, and mutual prosperity for all stakeholders,” the company said.

The company expects that with Adyoulike’s social advertising technology, OpenWeb will have the ability to connect audiences with brands across the web as a seamless part of the on-site experience for its more than 100 million monthly active users.

Adyoulike -- which launched in Paris more than 12 years ago and uses a contextual first-party data system to serve ads -- works with about 4,000 brands, agencies, and publishers including ESI Media, The Guardian, Reach, Prisma Media, and Groupe Marie-Claire.

Brands on the company’s website show it has worked with BMW, Ford, Toyota, Nikon, and Nokia.

The acquisition adds about 70 Adyoulike employees to OpenWeb, bringing the total headcount to nearly 300, as well as grows its presence in Europe with new offices in London and Paris.

OpenWeb works with publishers to help manage commenting platforms, interact with users through like polls and content recommendations, and use publishers’ information about their readers to serve advertisements.

OpenWeb announced in November that it had raised a series E funding round of $150 million that included investments from New York Times Co. and venture-capital fund Dentsu Ventures.

The company says its technology is used by more than one thousand publishers, including Hearst, Yahoo!, Penske Media Corporation, and News Corp.