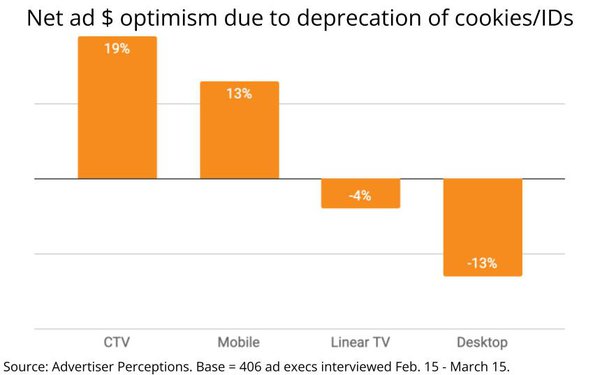 While much of the attention surrounding ad-spending fallout from Google's deprecation of cookies, and Apple's privacy framework has been focused on the impact to social media, the most positive impact appears to be for the connected TV (CTV) advertising marketplace, according to the findings of a new survey of ad executives conducted by Advertiser Perceptions for the Interactive Advertising Bureau (IAB).

The survey, released by the IAB this morning, asked advertisers and agency media execs to characterize how optimistic they are for investing in various media due to the loss of audience targeting signals from the deprecation of cookies and mobile identity trackers -- and found that the biggest beneficiary is CTV.

Utilizing net optimism -- the difference between those indicating they planned to increase of decrease ad spending in a medium -- CTV scored a positive 19%.

The next biggest beneficiary is mobile (+13%), while linear TV (-4%) and desktop digital (-13%) are expected to take the biggest hits.

The findings are telling, because CTV already is projected to be a high-growth ad medium, and because it is less reliant on browser cookies or mobile identity trackers for targeting consumers.

The study also found a variety of other data sources -- especially an advertiser's own "first-party" data about consumers, as well as location data, contextual data, consumer purchasing data, and ACR (automatic content recognition) data were among the biggest factors driving CTV buys. 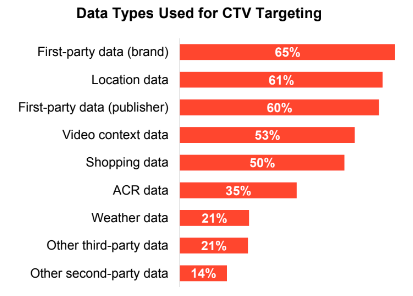