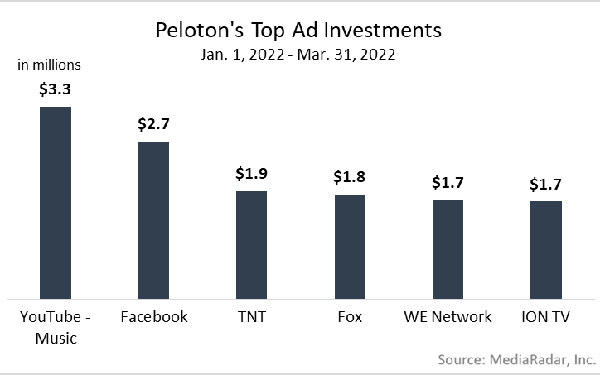 Peloton’s shares rose 220% in 2020 as a result of gyms closing during the COVID-19 pandemic as consumers purchased and used home exercise equipment -- but many of those gains were wiped out in 2021 with bad press, lawsuits and supply problems.

Despite these hurdles, the company increased its advertising investment, and spent more of its budget on YouTube and Facebook than other media outlets in the first quarter of 2022.

There’s a reason — last week the company introduced an advertising campaign that relies on popular instructors from its connected fitness platform to gain attention.

The company’s first-ever tagline — Motivation That Moves You — is being used in a new campaign that features celebrity instructors. Peloton partnered with Mother LA to create the new campaign.

Some 92% of households that joined Peloton still have active subscriptions 12 months later, according to company data.

The tagline is intended to capitalize on the keyword "motivation."

The new brand positioning centers on the idea that through its unique combination of "world-class instructors, content, music, hardware, and software," the experience makes fitness motivating that not only will consumers love working out, but they will stick with it.

The campaign, which kicks off in North America, includes 0:60, 0:30, and 0:15 spots that will air on various channels including television, digital, social, and over-the-top streaming content as well as out-of-home and more.

MediaRadar reviewed Peloton’s advertising from January 1, 2020 through March 31, 2022. This analysis includes national TV, more than 3,000 magazines, and newspapers from top 20 designated market areas in the U.S., as well as digital sources like podcasts, Snapchat, and YouTube.

Despite hurdles, Peloton increased its advertising investment 300% year over year (YoY), according to MediaRadar’s analysis. The company spent $294 million advertising across all platforms.

Peloton’s ad strategy noticeably shifted. Its first-quarter investment fell 22% in Q1 compared with the prior year -- and 2022 saw an estimated spend of $47 million.

Peloton also made print investment during Q1 2022 for the first time in the last three years. Of the more than 570 print, online, and TV properties that contained Peloton advertising, there were 14 that obtained more than $1 million from Peloton during Q1 2022 obtaining 51% of Peloton’s total Q1 ad spend, about $24 million.

Print accounted for 6% of the quarters spending. The New York Times received 44% of the ad spend, followed by The Wall Street Journal at 41%, Harper’s Bazaar UK took 12%, and the remaining was a mixture of D Magazine and GQ UK.

Peloton in Q1 2022 spent 45% in online video, followed by digital display. That’s a shift from Q1 2020, when digital display spending did not make a mark.