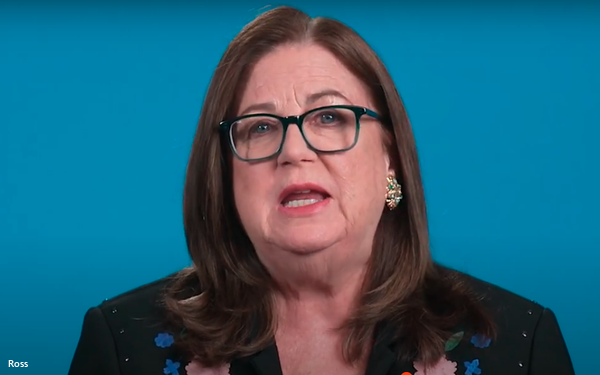 Although Paramount Global, like other major TV network companies, is seeing a weak scatter market -- from an iffy economy with supply-chain and inflation issues -- significant media dollars are still expected to land in TV networks' coffers during the upcoming upfront ad market.

The lessons learned are that the former lost brand awareness and engagement with consumers, but the latter survived until the marketplace turned around. “Those brands are still top of mind.”

That said, Ross confirms that the near-term first- and second-quarter scatter markets -- typically strong indicators of the health of TV’s upfront ad market -- are indeed "soft." She adds: "Is it slower than it was a year ago? Yeah, but we’ll come out of it. The economy has a lot to do with it."

The good news, she says, is that some categories are still going strong -- such as new digital-first advertisers that continue to move into big linear -- marketers that are needing more scale to add to their limited digital-only campaigns.

For this upfront, a number of new potential TV network "currencies" are being touted among TV networks and their associated streaming platforms. But Ross, and other executives, say adoption will be slow.

Most deals will be done on traditional Nielsen-based demographics, she says, "because you have to measure against something, and there is a historical track there."

Paramount Global is also expected to make an announcement at some point in the future with regard to another measurement deal -- with iSpot.tv.

But few, if any, currencies will get going this year -- possibly including so-called "secondary" guarantees, where advertisers look to add additional metrics to that of traditional Nielsen-based measures.

“We would prefer to use a 'test and learn' [approach] versus secondary guarantees,” says Ross. This also might be true for clients.

While some marketers might want a "hard" secondary guarantee, she says others might want to observe a safer "test and learn" effort, perhaps unsure about what those currencies could deliver. They might want to just "take a look."

For its upfront presentation later on Wednesday, Paramount Global and Ross will tout many of the company’s now established advanced advertising solutions and efforts.

One of the newer ad tools, "Super Franchises," allows advertisers to access Paramount Global’s major program and movie franchises across the company's range of media platforms.

Two other more veteran advertising efforts saw major growth over the last year or so, says Paramount -- EyeQ and Vantage.

Paramount’s advanced advertising unit, Vantage, its audience-targeting platform, has a linear, digital and an addressable TV footprint of more than 50 million households.