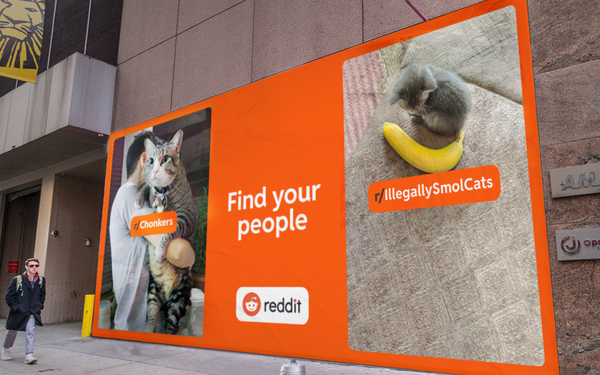 Reddit launched its first national TV campaign buy in partnership with the agency R/GA in the United States and Canada.

The company ran an ad during Super Bowl 2021, about five seconds in length. It flickered across TV screens -- similar to when television stations broadcasting in black and white would go offline for the night in the 1960s.

Reddit’s "find your people" campaign highlights the idea of finding like-minded people across the message-board platform when someone joins one of its more than 100,000 communities.

The campaign follows a year of growth for Reddit -- 42% in the U.S. and 38% in Canada year-over-year in 2021 -- specifically demonstrating the ability for brands to connect with consumers on the platform.

This campaign launches following this year’s Cannes Lions International Festival, where it was revealed to attendees via out-of-home advertisements and featured throughout Reddit’s Explorer’s Club – a custom-built clubhouse for all festival goers.

to dive into the platform’s communities and find their people.

The company re-launched r/place in Canada and announced its Community Funds program.

to celebrate its first year in the country. Reddit also partnered with Live Nation Canada to bring “Reddit House” to the Budweiser Stage in Toronto during the summer concert season. Some 70% of Canadian Reddit users have an interest in music, according to the company.

Reddit will curate a real-life experience through experiential agency Salt XC, for music fans through genre and artist customized digital signage and brand ambassadors to engage.