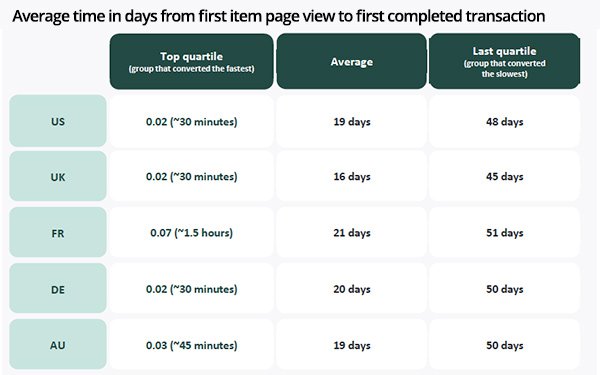 Criteo has released an insights and trends report based on an analysis of millions of consumer transactions from thousands of retailers.

Consumers in the U.S. and in the UK last year moved from discovery to purchase in less than an hour, while others took nearly two months.

Criteo sales data shows that last fall, the average time between a first-page view and a purchase was just 30 minutes for the one-quarter of U.S. consumers who demonstrated the shortest path to purchase

For the one-quarter who had the longest path to purchase, the average time between a first-page view and a purchase clocked in at 48 days. Consumers in the UK and Germany had a similar range, while the fastest converters in France took a bit longer, between one and two hours.

Data from thousands of Criteo retailer partners — millions of consumer transactions from its global monthly Consumer Sentiment Index survey, along with insights from its commerce media experts — was used to compile these holiday commerce predictions.

When asked to cite the media in which the respondent discovered the product purchased, 39% in 2022 cited a search engine, compared with 38% in 2021. This makes sense because of the amount of shelf space required to present merchandise.

Criteo data shows that in the U.S., the share of new buyers — consumers identified as new customers to a brand or retailer — begins to rise in early November and peaks on Black Friday. That makes this period crucial to acquire new customers.

Cyber Monday and Black Friday deals have turned into Cyber Month. Shoppers don’t expect to grab all the best deals in one day. Instead, they are doing it all month long during Cyber Month.

Later in December, the focus should turn to returning customers and client loyalty, as the share of new clients is then at the lowest point.

Concerns over possible limited supply also prompts people to go in-store rather than buy online and wait for the product to arrive if they think the product is available in the store.

Longer shipping times and earlier last-ship dates will also bring shoppers into stores earlier than in past years.