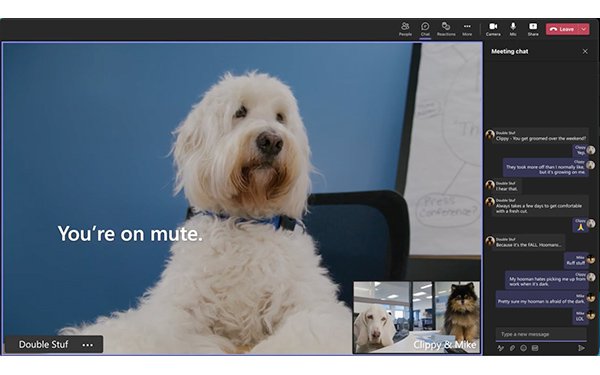 Microsoft 365 and Mondelez International’s brand Oreo Thins created the short film Return to Pawfice, to spread the word about workspace burnout and emphasizes the benefits of taking a break, especially during the holidays.

With back-to-back meetings during the fourth quarter of the year, it’s challenging for people to find time for midday breaks. So, the two companies teamed up to make “adulting” more playful and help fans book breaks on their calendar.

THINVITE, what the companies call “a 15-minute” hold on their calendar will encourage employees to take a snack break. Fans sign up for the break and receive an email invite. But it’s not a real meeting. It’s a must-attend break.

Each calendar invite includes a link to a Microsoft Teams event that streams content, with a playful, workplace-themed video.

The short film -- Return to Pawfice, which premiered Tuesday -- showcases a day in the office as eight playful pups take over the real-life office and home to Oreo in East Hanover, New Jersey.

In the short, lighthearted film, one scene features Double Stuf saying: “You’re on mute." In another, Oreo says: “I wish I could mute real life.”

Credits for work on the short film and project go to OREO; Microsoft 365; Weber Shandwick, the lead creative along with Oreo public relations; WE Communications, Microsoft’s public relations team; Dentsu Creative, which support Oreo Social; and Red Summit Productions, which led production of Return to Pawfice.

The two companies teamed up to create the short film based on research.

Calendars are often filled for employees, especially during the holidays -- a time when workers often forego breaks, according to the Microsoft Work Trend Index report in collaboration with Oreo Thins.

Employees are now more likely than before the pandemic to prioritize their health and wellbeing over work. ]

For example, 53% of employees are more likely to prioritize health and wellbeing over work than before the pandemic; and 52% of Gen Z and Millennials are likely to consider changing employers this year, up 3 percentage points year-over-year.

Microsoft also created two Oreo-themed emojis to use in a Microsoft Teams chat. The emojis appear when users type “oreo” and “oreoyum” in a chat bar, prompting either by a spinning Oreo emoji or a character eating the treat.

The THINVITE and virtual snack breaks on Microsoft Teams are open to all fans, but the “Return to Pawfice” video was intended to help make “adulting” more playful and help adult fans enjoy their snack breaks in the midst of back-to-back meetings.