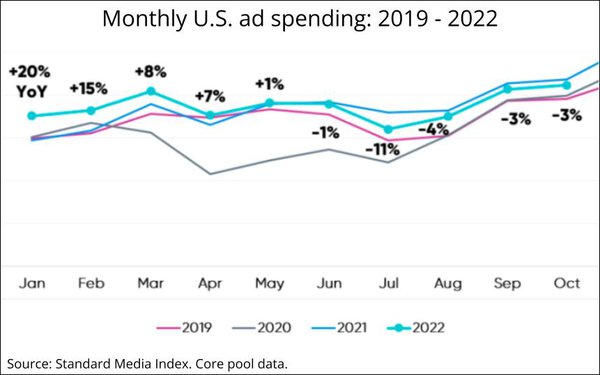 While the U.S. ad market declined for the fifth consecutive month in October, signaling signs of a new advertising recession, a longer view suggests it is more of a stabilization than a downward correction.

"[We see] this less as recessionary fears and more as the ad sector normalizing from an overly hot last year," Standard Media Index says in its own analysis of the core data it processes from the major agency holding companies' actual media buys.

That said, on a year-over-year basis, most major media have been taking hits, with the exception of out-of-home, which continues to rebound at healthy double-digit rates throughout the year -- and especially when looking at the medium's growth over the past two years.

And while "digital" media also continues to show sustainable growth, it has begun decelerating into the mid- to low-single-digit growth range in the most recent quarters.