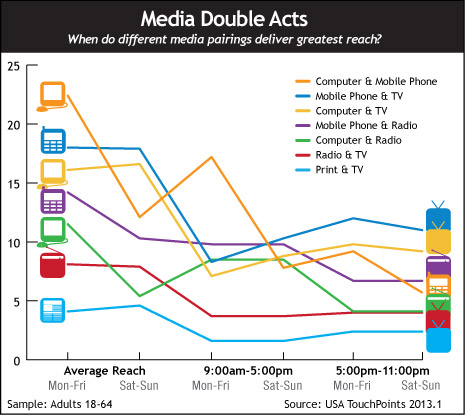 The growing multitude of media devices and channels available to us has made media multitasking more complex. This USA TouchPoints analysis looks at which pairs of media devices are most commonly used at different times of the week.

The data within USA TouchPoints is provided throughout the day by respondents in half-hour increments. This makes it possible to investigate how behavior differs by time of day, impossible to determine with next day recall or one-off surveys.

As a result, it is possible to understand which media double acts occur most frequently and what reach they deliver among Adults 18-64 by day part and day of week.

For this analysis, we have compared the standard working day of 9 a.m.- 5 p.m. with the evening — defined as 5 p.m.-11 p.m. (True, not New York media community hours, but perhapas more in line with the general population.) We also looked at media most commonly used within the same half-hour.

One notable finding is the extent to which we see the same devices occurring within the seven media pairings that deliver highest reach. While there is theoretically room for as many as many as 14 different candidates, there are in fact only five: Computer, Mobile Phone, TV, Radio and Print.

TV appears most frequently (fours times), which is not surprising, given how much time we spend with it and considering we watch in an environment compatible with other media use. Mobile Phone, Computer and Radio all feature three times — speaking to their ubiquity throughout the day — and print just once.

While some may expect TV to dominate the findings, things are not so clear cut. For example, more people use a computer and a mobile phone in the same half hour on a weekday than any other combination, though this slips to third place behinds Mobile and TV and Computer and TV on the weekends, when far fewer people are working in offices and computer use declines.

Computer / Mobile is most distinctly dominant during the work day in the week, but tails off markedly into the evening as time with TV increases and the hierarchy of device combinations is impacted.

The strength of the Mobile Phone within the various device combinations is a reflection not only of it’s ubiquity but of the multiplicity of functions. Most of which can demand little in terms of time commitment. Also, as a communications device the Mobile is both perennially available and the one device that has the ability to “interrupt” wherever you are.

Understanding which media combinations are most likely to be used by a given audience at different times of the day or week will increasingly help shape media plans and budget allocation — particularly as such insights become linked to other behaviors, such as shopping trips, visits to QSRs, restaurants and the movies. The result: creative will be shaped to leverage accordingly.