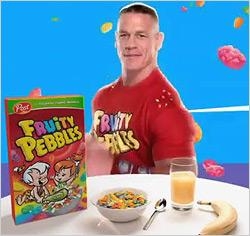 Post Fruity Pebbles is expanding its existing partnership with WWE (World Wrestling Entertainment) and one of its stars, John Cena.

The cereal brand is launching two new television commercials, as well as a photo app and an on-pack giveaway, featuring Cena.

Cena has previously appeared as a "Pebble-ized” character on special boxes of Fruity and Cocoa Pebbles.

The new TV campaign includes two spots, already on-air. One features Cena enjoying a bowl of Fruity Pebbles to "amp up" his morning.

In the other spot, Cena drives fans to a new interactive mobile app, PebblesPics.

PebblesPics, available on iTunes and the Google Play store, allows users to create a photo of themselves “posing” with Cena by superimposing an image of him alongside their own images.

Two photos of Cena can be downloaded, and additional images can be unlocked by users who scan QR codes on Pebbles cereal boxes.

In another tie-in with WWE, consumers who buy two boxes of Pebbles cereal are eligible to receive two free Mattel/WWE "Rumblers" action-figure toys.