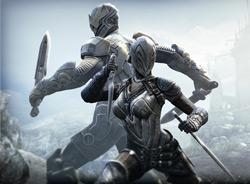 For those who were wondering whether the seemingly incremental upgrades to the iPhone 5S had any real implications for the market, I am here to tell you -- just try running the new Infinity Blade III over Apple TV using AirPlay.

Zowie. This damned slab of thin hardware just ate my Xbox. For the first time in a while, I was blown away by the evolving capabilities of a smartphone.

A few things appear to have happened at once here since the last time I struggled to make gaming over AirPlay really work for me. I have argued in this space on many occasions that home WiFi networks are one of the under-reported weak links in the post-PC environment. Routers are not only maddeningly frustrating to set up and maintain for most consumers, but performance is all over the map, even within one's own home. Although I have had dual band 802.11n routers here in the home test lab for years, getting games to run reliably over AirPlay to the Apple TV has been frustrating. Both phone and Apple TV boxes have to be working well over the same network, and this rarely seems to have been the case. Simple AirPlay tosses of photos, images and most videos seem to work well enough, but mirroring handheld or tablet gameplay onto the big screen usually produces hiccups, which pretty much kills the deal in most games.

That problem is not overcome entirely with the 5S, but it can use the 5.6Ghz band on 802.11a or n networks for cleaner and much faster signals. My recently updated Netgear 6300 pumps much higher-powered channels than its predecessor and I have seen the 5.6Ghz channel approach the speed of the wired connection itself. While still not clean and pause-free, AirPlaying Infinity Blade III, a visually complex hack-and-slash fighter game, via Apple TV played well, as did mirrored gameplay of LIMBO, the brilliant side-scrolling puzzler.

But the real stunning development is the level of graphic sophistication the 64-bit iPhone 5S CPU makes possible with a gaming title like this. Epic Games just released its update that takes full advantage of the A7 processor, including adding anti-aliasing and high-res shadows. The result on a 60-inch TV is jaw-dropping. My phone was serving onto my TV a gaming experience that was on par with consoles. Real-time rendering of 3D graphics was superb, and this from the first title on a CPU that has only been available for a week. Imagine what developers could do with this over time?

What becomes very real to me is the prospect of a game economy where the handheld device becomes the main processor. If you combine cloud-based storage and streaming with 64-bit device processing and any available monitor, you have a very different gaming economy. If the next iteration of the Apple TV device has anything that even vaguely smells like linkage to iOS gaming, Sony and Microsoft should be very, very concerned.