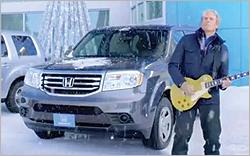 Michael Bolton is the star of Honda's year-end sales campaign, "Happy Honda Days." Besides a raft of TV spots featuring Bolton appearing magically at Honda dealerships, the company is doing a live social media event on Friday hosted by Bolton in which people can message a friend at #XOXOBolton via Facebook, Twitter, Instagram or Vine, for a chance to get a real-time personalized response back from the singer.

Honda says the TV ads will air in 210 markets via buys on  network, cable and spot TV. Placements, per Honda, will be on shows like “The Amazing Race,” “Big Bang Theory,” “Duck Dynasty,” “Modern Family,” and “The Voice.” The creative extends to digital display, pre-roll and mobile, national radio and national print in such publications as People,Sports Illustrated and USA Today.

In addition to promoting such vehicle technology as a earview camera, Pandora Internet radio and Bluetooth HandsFreeLink, the campaign touts its top-selling vehicles Pilot, CR-V, Civic and Accord.

One spot has a guy using the infotainment system in an Accord to open a huge present on the showroom floor in which Bolton sits at a piano, plays and sings. In another, Bolton skis into a dealership. which suddenly becomes a stage set complete with dancing skiers. He straps on an electric guitar and goes into a rock song about the holidays. All of the songs for the campaign are originals.

Analysts looking at the fourth quarter are pretty sanguine about how this year will turn out for the auto sector, with most in accord that 2013 will end up the strongest since the recession. While in October, Honda and other imports saw sales slip, there were some statistical oddities that clouded results because of the fewer sales days in the month, among other things.