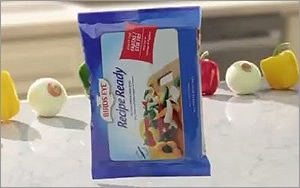 The spots from BBDO, viewable on YouTube, use stop motion to show veggies on a kitchen counter coming to life.

The spots illustrate the convenience benefits of the pre-sliced/pre-diced products, which come in 20 varieties that can be added to meats, pastas and other ingredients to create home-cooked dinners in 30 minutes or under (a foolproof recipe is also included on each package).

Each spot ends with the message that Recipe Ready vegetable blends are "just like fresh," but have a specific advantage over fresh (faster, without the waste, without the mess).

The ads are running on national cable channels, including Food Network, Cooking Channel, HGTV, TLC, Lifetime, Discovery, Hallmark, Nick at Nite, Oxygen, TBS, TNT and We TV, through April. They're also running on local TV in the Cincinnati and Pittsburgh markets.

Digital advertising components have been key in Bird's Eye's marketing for Recipe Ready, which launched last fall. These have included a geotargeted campaign on Allrecipes from September to November, and a national effort that ran across Food Network, AllRecipes and Rocket Fuel from Sept. 30 through December.

The launch marketing also included outreach to parenting bloggers and local media, with participating media receiving coupons and product samples for reader giveaways. Some were asked to create original recipes with Recipe Ready.

Trade media helped get the word out to retailers, and in-store merchandising and promotions have been employing shopper marketing.

Recipe Ready, like other Birds Eye products, is also garnering exposure and goodwill from the brand's participation in the Partnership for a Healthier America, including various initiatives to encourage kids to eat veggies.