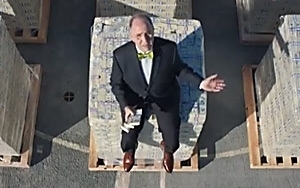 H&R Block has launched an experiential marketing program that puts the brand in the hands of consumers and rewards them with cash.

The 20-foot-by-20-foot kiosk is set up in high-traffic locations where participants take a two-minute quiz which includes imagining what they would do with a billion dollars. As a reward, the kiosk dispenses up to $100 per participant.

“The kiosk is definitely a first of its kind -- for us or for anyone,” says Christina Lively, H&R Block director of brand strategy and integration. “It’s part ATM, part photo/video booth and was built from scratch for our 'Get Your Billion Back' events.”

The activation concept is based on a study H&R Block conducted last year that revealed that when taxpayers prepare their own tax returns, about one in five is leaving money on the table by not claiming all available tax credits and deductions, Lively says. These inaccuracies contribute to more than $1 billion in unclaimed money.

“The reaction has been incredible,” Lively tells Marketing Daily.“We set out to surprise and delight consumers, and this activation did just that. Consumers can’t believe that H&R Block is giving away real money and long lines formed very quickly in all of the markets.”

About 600 consumers have gone through the experience, and thousands of others have been exposed to the brand onsite and through event videos, she says.

Lively said it has not been determined whether the kiosk will be expanded to more cities next year.

“We’ve had a lot of fun with this throughout the season and would love to continue surprising and delighting people the way we have with our ‘Get Your Billion Back’ events,” she says.