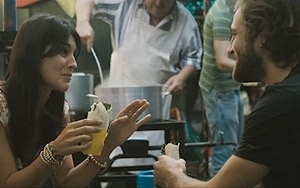 Rosetta Stone's new, integrated campaign is a big departure from anything the company has done before for at least one big reason: it's about the mission, not the iconic yellow box. The company, which is expanding beyond the language category into areas like cognitive training, and childhood education products — and also away from that yellow box and into a digital product and commerce model — wants Millennials to know that it is purpose driven: learn another language and help make the world smaller and more cooperative, while giving yourself entrance to other cultures.

Says Kelly Poling, VP marketing, strategy and operations: "What most marketers recognize is that this is a highly lucrative population, and 50% of Millennials worldwide are under 30; by 2018 they will have more spending power than any in history. And we have always known we have a really good product for them; this audience over-indexes for travel and for its global outlook." She adds that Millennials also represent 70% of all spend on language learning, "so we saw an opportunity to launch a campaign that did a better job of telling our story."

The effort, via Chicago-based Energy BBDO, includes TV, print components, and radio. But the majority of media spend is digital with a heavy social media component, as well as mobile, online video and, obviously, search and display. The highlight of the digital side of the effort is via a partnership with Vice, which has developed online video webisodes to air both on the Vice distribution network and also on Rosetta Stone's own online channels.

The videos, developed with Energy BBDO, comprise four vignettes following four real people learning a language with Rosetta Stone, then taking a trip to another country where that language is spoken, and using the language to continue learning. The end product is between eight and twelve minutes long, per Poling.

Jonathan Linder, VP creative director at Energy BBDO, tells Marketing Daily that the agency worked with Vice around casting and conceptualization, "and they went and produced it. They really did their own thing."

The first online video, which aired on Vice this week, features a Millennial learner and soccer fan. He uses Rosetta Stone to learn German, and then heads to  Germany, where we follow his experiences interacting with Germans and watching the team in the World Cup. "And that was extremely serendipitous for us, obviously," says Poling. "Watching him use Rosetta Stone and seeing how it facilitates a better experience is very authentic, and the pinnacle is his going to the game and hanging out with the German 'hooligans'; it shows how Rosetta Stone facilitates real human connections."

The TV spot focuses on how people who learn new languages are able to share experiences with people from other places, and that "if everyone learned just one more language, the world would be a more tolerant place, a happier place. In short, a smaller place." Tag: "Create a Smaller World." The TV buy is with channels that the company hasn't focused on historically: ESPN, FX, MTV, VH1, and channels like Adult Swim, and Comedy Central. "We'll be in a number of places where you imagine Millennials spend time, But we are doing the majority of media online," says Poling.

She tells Marketing Daily that the creative, around the smaller-world theme, "is really less a tagline and more of us to trying to do a better job of articulating who we are as a brand," says Poling. "Ultimately, we believe that we want to make the world a smaller and smarter, and a more creative and collaborative place. That's at the core of company." She adds that the effort signals more broadly that it's a new day at Rosetta Stone. "We aren't just the iconic yellow boxes at the airport kiosk. We are heavily digitally focused now: the majority of our sales are through digital products versus that yellow box," she says. "So we want talk about how innovative our products are; that, for example we have 33 apps in the App Store right now."

Linder says the agency came up with the backbone of the idea around "Imagine the world in which everyone learned just one more language" (the opening line of the TV spot), and that it was a question that would become the guiding principle for the campaign. "It helped inspire all of the pieces of the campaign," he says.