Target Asks Who Needs Ads When You Can Use Dragons? 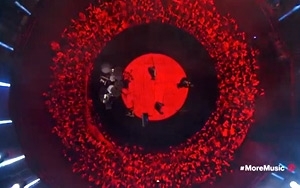 In one of its boldest buzz-building moves in years, Target decided not to run ads during the Grammys, and instead used the eight 30-second spots to air a four-minute live performance from Imagine Dragons.

The Minneapolis-based retailer, which has been sponsoring the event for 15 years, then gave the social universe an incentive to share, promising them that by tweeting about the song using the #MoreMusic hashtag, they would unlock an additional Imagine Dragons song available exclusively at Target.

Target says it is the first live concert experience to air during a commercial break in the 57-year history of the Grammy Awards. It was the band’s debut of “Shots,” and a Target spokesperson tells Marketing Daily that the idea has been percolating since the band’s breakout performance during last year’s Grammys. With the new album hitting this year, she says the goal was to create “a moment that would catch the world by surprise and celebrate music’s biggest night. We wanted to do something unique and give fans what they want most,” she says, “more music and less commercials.”

The retailer used social media to build anticipation for the performance. “Through a variety of platforms, we shared clues and an inside look at how the production was coming together to catch people’s attention to tune in.”

The performance was directed by music video director Jonas Akerlund, and included 20 cameras, including some shot by helicopter. And footage from the show is scheduled to appear in 30-second commercials for the deluxe edition of the new “Smoke + Mirrors” album, exclusive to Target, next week. That version includes four bonus tracks (“Thief,” “The Unknown,” “Second Chances” and “Release”) as well as exclusive cover art.

awards show, music, retail, social media, tv
3 comments about "Target Asks Who Needs Ads When You Can Use Dragons?".
Check to receive email when comments are posted.
Read more comments >
Next story loading