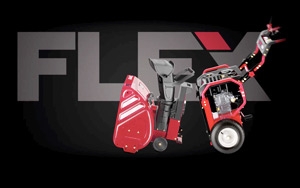 The campaign, via Cleveland-based Marcus Thomas, kicks off with a 30-second TV spot, “It Just Clicks,” that features a musical soundtrack of sampled machine noises, and touts the machine's ease-of-use and all-season functionality.

The spot runs nationally on DirecTV's addressable platform with household targeting based on yard size and homeowner’s age. There is also a programmatic TVbuy, via Salt Lake City-based Placemedia, on shows digitally selected for yard, garden or DIY content. The company says the TVplacement is on channels like HGTV, A&E, and USA. With HGTV, Flex is integrated into an episode of the channel’s home remodeling “Flip or Flop” realityshow, with gardening and DIYbloggers competing in head-to-head challenges. The challenge will be promoted on the bloggers’ own, and on Troy-Bilt’s channels.

The digital campaign includes page takeovers, and contextual content takeovers where editorial photos are replaced by an animated Flex ad for 10 seconds. The photos redirect clicks to a dedicated site, or to the TV spot. The company says it is also retargeting people who have seen theTVspots. They get a sequence of up to four pre-roll or rich media ad units, each featuring a different Flex functionality. People who see the digital ads three or more times will then get a geo-targeted retail-focused mobile ad.

“Extensive research told us that the Flex system was likely to appeal to a few different types of homeowners with varying needs, mindsets, space constraints, and yard sizes,” says Megan Peth, brand director at Troy-Bilt. She tells Marketing Daily that the company, therefore, made sophisticated media targeting a key aspect of the strategy. “Other more traditional media, like TV, allowed our message to reach a broader base, while still (via HGTV, for example) gaining more exposure to those more actively thinking about their yards.”

She says that the company is expecting strong response based on early research, which "shows high interest and engagement in Flex, and our advertising is designed to bring that to life and leverage its uniqueness.”

Troy-Bilt is also doing a homepage takeover of Wired.com, and will have point-of-purchase displays at Lowe's stores.