Johnnie Walker Hooks Up With 'Johnny Drama' From 'Entourage' 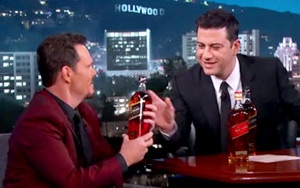 The video (which plugs the movie's theatrical release at its end), hosted on Johnnie Walker's YouTube site and promoted on its social media channels, is dubbed "Johnny for Johnnie." It was written and produced by "Entourage" creator Doug Ellin, and directed by Kevin Connolly, a co-star of the show and the movie.

The premise: Johnny Drama dreams that he's been made the new face of Johnnie Walker, and that he appears on "Jimmy Kimmel Live" to promote the development. He tells Kimmel that if things go well, the brand may actually add a new label beyond its Johnnie Red, Black and Blue versions, called Johnny Drama (screenshot shown).

The original short film and surrounding promotion are another extension of Johnnie Walker's long-running "Keep Walking" (#KeepWalking) campaign, which is positioned as aiming to inspire "personal progress" and celebrate big and small achievements along the way.

The partners say the "Entourage" themes and characters, and Johnny Drama in particular, have commonalities with the JW campaign.

"What makes the 'Entourage' series so universally relatable is that its story revolves around a group of friends and their unrelenting pursuit of their dreams," says Dan Sanborn, VP of influencer and entertainment marketing for JW parent Diageo North America. "We all have dreams, but it's not always easy to achieve them. In this short film, Johnny Drama — as only Drama can — brings to life his own dream, bringing some fun and levity to his journey and all of the steps along the way."

The Cornerstone Agency served as the lead creative agency for the partnership between Johnnie Walker and the "Entourage" movie.

In addition, the brand will soon release a "responsible drinking"-messaged video short, also scripted by Ellin, that's an extension of the "Johnny for Johnnie" short film.