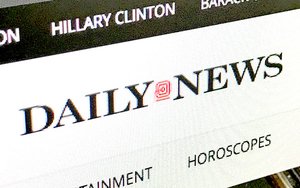 New York Daily News editor-in-chief Arthur Browne warned that a round of layoffs could come before the end of the year, if enough staffers do not choose to take a voluntary buyout offer.

In an internal memo obtained by Politico’s Morning Media, Browne said he was “obligated” to tell the newsroom that staff reductions are “inevitable in the near future.”

"The economics of journalism are brutalizing media organizations across the country and beyond. Revenue that was once taken for granted is long gone, forcing the industry to evolve rapidly. Although the Daily News has made remarkably successful strides, we must move still more quickly to serve a growing readership,” Browne wrote.

But he added that if not enough employees take the offer, he is “sadly compelled to state that involuntary dismissals could well become necessary before the year's end."

“I am deeply pained to write this letter, but nowhere near as pained as you will be to read it,” he wrote.

In October, former editor-in-chief Jim Rich left after only a year on the job. He was replaced by Browne, then the newspaper's editorial page editor. Rich oversaw dozens of layoffs soon after he was appointed.

The Daily News is not the only publisher looking to make cuts by the end of the year.

In October, TheWall Street Journal announced it was seeking “a substantial number” of buyouts to limit the number of layoffs it will inevitably need to undergo. According to the union representing WSJ employees, IAPE, buyout requests have been approved for about 50 of its nearly 500 members at WSJ.

In September, Guardian U.S. also offered buyouts to cut about 50 jobs from the 150-person organization and The New York Times revealed that around 80 employees had recently accepted voluntary buyouts.
employment, newspapers, print, trends
Next story loading