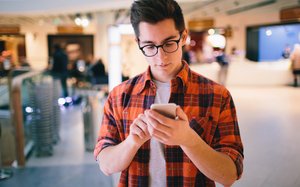 In true IoT fashion, even smartphones will be getting smarter in the near future.

More than 300 million smartphones will have machine learning capabilities in the devices within the next 12 months, according to one of a series of new 2017 predictions by Deloitte.

These machine-learning capabilities also will be found in tens of millions of drones, tablets, cars, virtual and augmented reality devices and numerous other IoT devices, based on the study.

One of the most interesting of predictions relates to digital navigation indoors.

At least a quarter of all human and machine uses of precision digital navigation will include an indoor leg or be for an entirely indoor journey by 2022, says Deloitte. This compares to less than 5% of all uses this year.

Over the medium term, beacons, LED lighting, ultra-wide broadband and magnetic fields are expected to join the mix.

There are significantly more Wi-Fi routers than cellular stations. By next year, Deloitte projects there will be 340 million Wi-Fi hotspots globally, a dramatic increase from 50 million just a year ago.

Though still at an early stage in the U.S., connected LED lighting can provide accuracy to within under two feet. The lights can send a unique identifier to a smartphone, as long as the phone has a line of sight to the light. This approach is expected to be shown at the National Retail Federation’s Big Show in New York next week.

Beacons are another component of the indoor location mix, with an estimated 7 million already installed globally, most notably in retail stores.

Add to this ultra-wideband indoor positioning, which works by measuring range and angle estimates from a set of fixed points to a tag positioned on an object, and magnetic positioning, using the magnetometer in smartphones, and prospects of more precise indoor positioning greatly improve.

Installing any of the location technologies is but a small piece of the puzzle.

The challenge is to blend all the location data sets together into one, coherent stream, resulting in higher consumer value, such as being able to quickly find a store, the correct aisle and the desired product.

Indoor location is on its way well up the IoT value chain.