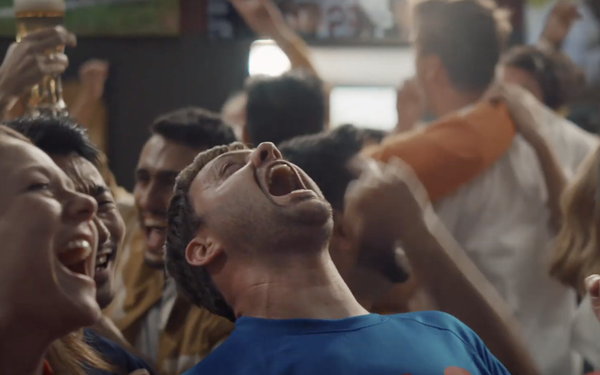 It’s the time of the year — football season — that puts relationships to the test, and Buffalo Wild Wings has a potential solution.

The sports-themed restaurant is offering the Football Prenup, which allows fans to customize season-long terms so football fandom and domestic bliss can both survive.

The campaign breaks today and includes eight TV spots throughout the season as well as social and digital. The ads encourage sports fans to ditch the obligations that might prevent them from watching the games at BDubs with fellow fans, hot wings and cold beer while basking in the glow of endless TVs. The Martin Agency developed all ad creative and thel Football Prenup program interface was developed by 22squared.

Fans can head to FootballPrenup.com, where they will be instructed to type in the names of both parties entering the agreement. Next, they must list favorite team and games you want to protect as well as what their partner wants in exchange for those protected game.

Football rules analyst Mike Pereira stars as the “Prenup Official” in a video where he instructs fans on how to set up their contracts and avoid any red flags throughout the season. A separate video explains the value of a prenup.

The work is focused on building on the core idea the company laid the groundwork for in March, that sports are better enjoyed with friends, says Seth Freeman, CMO of Buffalo Wild Wings.

“There’s a real cultural tension between the excitement that true football fans have during the season and the reality of life getting in the way,” Freeman tells Marketing Daily.

“I think we’ve all been there before -- when we’re forced to either miss a big game, or gotten in trouble for ‘sneak watching’ on our phone because of a wedding or just busy work around the house. We wanted to have some fun with this idea and create a program that helps fans maintain their fandom AND keep the peace at home. What better way to do that than with a Football Prenup?”

While BDubs celebrates all sports, “there’s nothing quite like football,” he says.

This year’s effort around the football season isn’t necessarily bigger, but it is different.  "We have a more impactful football program this season that is in line with our brand strategy and continuing our journey of evolving the sports-watching experience," Freeman says.

Buffalo Wild Wings is partnering with several influential couples, such as college football reporter Laura Rutledge and her husband Josh, a retired pro baseball player, who will implement the Football Prenup into their gameday plans this fall.

The 30-second “Mancave” spot will lead the campaign, condemning mancaves as one of the key enemies of football. A 15-second spot “High Five” mocks those who are watching the game at home alone (“What are you going to do, high-five yourself?”) and will showcase some of Buffalo Wild Wings’ key offerings such as its Football Game Day Menu.