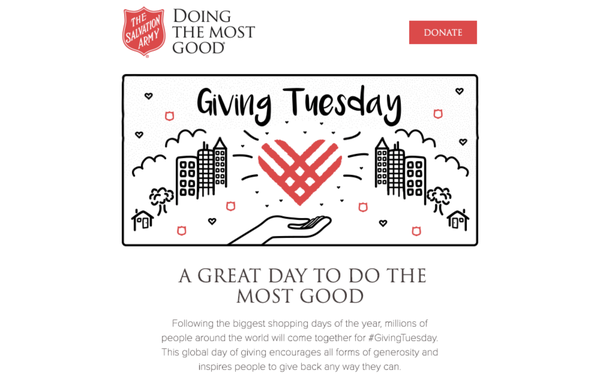 Giving Tuesday is an annual global day of giving that falls on the Tuesday following Cyber Monday. It's a huge opportunity for nonprofits like The Salvation Army to raise donations.

However, the movement's popularity and the congested nonprofit landscape means inboxes are bombarded with similar messaging, making it exponentially more challenging to stand out from the crowd.

Looking at The Salvation Army's 2017 Giving Tuesday campaign, agency DEG, Linked by Isobar found that its donation asks didn’t match donor expectations, there was only one email send promoting the day, and a standard donation form was used. All of these areas provided opportunities for improvement.

To optimize the campaign for 2018, DEG would also need to grab subscribers' attention, explain why The Salvation Army deserves their support, and inspire maximum giving.

To accomplish this, it sent its first two campaign emails in the weeks leading up to the event, driving awareness and including soft asks that urged subscribers to "save the date" by clicking a link that added a Giving Tuesday event to their calendars.

On Giving Tuesday, the agency sent two additional emails with stronger, clearer asks that brought donors to a crowdfunding page, where they could see their community’s effort in action.

DEG knew that matching donation opportunities would double the campaign’s effectiveness, but matches were not available in every division. In areas where there wasn’t a match, it used dynamic asks based on profile averages.

Travis McCan, email strategist for The Salvation Army account, says DEG learned how different audience segments engage with the brand. "We were able to see how much they gave, the frequency, and differences from other groups. Also, we were able to compare the data we now have with other studies they had run to see how each subgroup impacts the overall results. We are still learning ways to use the data and have found it very helpful in planning campaigns.

"Knowing what we know now, we would have likely pushed for the data earlier to use on campaigns leading up to Giving Tuesday. We'd also have invested more into building the content zones in Salesforce in order to handle the dynamic elements at the beginning.

"If another group is looking to do a similar project, we'd recommend they first look at the data they have. Develop a strategy to personalize the experience as much as possible. Once all internal paths have been evaluated, look to third-party data sets to enrich your options.”

This campaign won Best in Show in MediaPost's Email Insider awards and the Sales/Contests/Offers category.