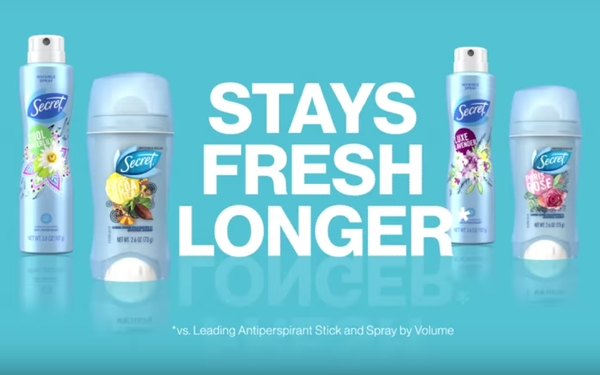 Ad agencies and media platforms that may have been affected by Procter & Gamble’s new attitude about advertising its products should expect more to come.

“Our agency reinvention has not only saved $1 billion over the last five years, it's also leading to more creativity, agility, and entrepreneurship, and helping to transform our organization and culture,” P&G’s chief brand officer, Marc Pritchard, told attendees at the Morgan Stanley Global Consumer & Retail Conference in New York earlier this week.

Some of that savings is coming from P&G decision to take ad functions, including creative, in-house.

“Secret [deodorant] no longer has an agency of record,” Pritchard said. With P&G’s do-it-yourself approach, the company is “producing ads for as little as a tenth of the costs — and in one month versus five.”

He showed the crowd an in-house-created Secret ad and then explained, “That was shot in Cincinnati. The opening scene was in P&G's home office. The producer is the associate brand director, the creative director is the brand manager. And it’s winning in market. Secret sales have consistently grown mid-single digits since in-sourcing this work.”

Like other major advertisers, P&G for several years has been rethinking the tenets of its marketing practices, particularly in the digital realm. Because P&G is the world’s largest advertiser, its ad strategy carries outsized importance.

Pritchard said the company’s first phase included demands for more accountability and transparency and an industry crackdown on ad fraud.

“The first step is largely complete, and it exposed substantial waste,” he said. “So we reduced wasteful spending and reinvested it back into better-performing media.”

Now he said,“We're reinventing media, moving from mass blasting with a lot of waste to mass reach with a one-to-one precision through data, analytics, and digital technology,”  Pritchard said.

A lot of that reinvention, he said, involves P&G’s efforts to build a consumer database that “enables moving from generic audiences to what we call smart audiences,” culled from from collecting demographic and behavioral characteristics,

The company’s greatest success with that approach so far has been in China, where 80% of P&G’s ad buys come via programmatic. He said P&G reduced waste there by 30% last year, while increasing the number of people reached by 50%.

The company found the opposite of that precision when it analyzed TV set-top data in the U.S. and discovered that Tide spots were “reaching the same household as many as 22 times a month,” said Pritchard. “So [we] cut off the excess and placed ads with greater precision in programs to avoid the annoying experience of seeing the same ad over and over and over again.”