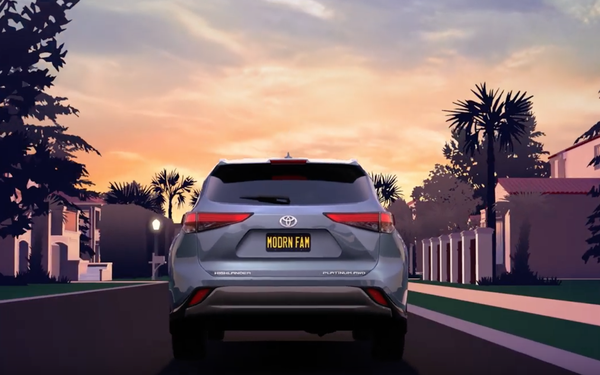 After sponsoring the “Modern Family” series consistently for its 11-year run, it seems only fitting that Toyota would honor the TV show with a custom spot.

Created by Disney Advertising Sales’ Entertainment Brand Solutions team, the 30-second spot will air twice during a retrospective of the show tonight at 8 p.m. ET, but will not run during the one-hour finale at 9 p.m. The automaker is the only brand airing a custom tribute ad for “Modern Family” tonight, per a spokesperson for the show.

Narrated by Ty Burrell, who plays dad Phil Dunphy, the animated creative shows a Toyota Highlander stopping at each home that appeared in the show and recounts some key plot twists before driving off into the sunset.

Toyota was the first brand to carry out an integration with “Modern Family” and has been a part of the series throughout its run.

“Toyota has been a crucial sponsor of ‘Modern Family’ since the very first season, and its vehicles have grown with the characters through the years,” said Jerry Daniello, senior vice president, Entertainment Brand Solutions, Disney Advertising Sales.

From Claire’s Sienna (she later switched to a Camry after her kids grew up) and Mitch and Cam’s Prius to the Corolla Haley received on her 21st birthday, Toyota has been a part of the plot.

When “Modern Family” first debuted, the storyline was groundbreaking for its portrayal of openly gay characters. Although some brands were hesitant to be aligned with the show, Toyota embraced the content and has supported the show since the beginning, according to a show spokesperson.