Foursquare has gained Media Rating Council accreditation for its Visits location data. The company claims the accreditation, based on MRC Location-Based Advertising Measurement Guidelines, is the first location data service to be accredited.

The MRC accredited Foursquare Visits for its ability to comply with industry standards, as well as to estimate and validate real-world visits and surface that data to customers.

"The accreditation process has been in the works for several years," said Jim Watson, SVP of client services. “Shortly after the MRC released its Location-Based Advertising Measurement Guidelines in 2017, Foursquare, Placed and Factual individually began their processes for accreditation, and continued pursuing accreditation as one company following their respective mergers and acquisitions.”

As part of the process, Watson said, independent CPAs on behalf of the MRC have reviewed Foursquare’s technology and its ability to estimate and validate real-world visits and surface that data to customers through its Foursquare Visits offering, along with all supporting documentation -- and have deemed it to be in compliance with the standards set forth by the MRC.

Watson had been leading this process at Placed prior to its acquisition by Foursquare in 2019, and has continued to lead efforts on behalf of Foursquare. The company must undergo an annual audit to ensure that its data and technology continue to comply with MRC standards.

Foursquare pioneer location-based check-in early on to create offline-to-online measurement, targeting and point-of-interest data. Agencies such as 360i and companies such as Pandora have been using the data for years.

When the MRC began developing the advertising measurement guidelines in 2017, there were at least 15 location companies that contributed to those guidelines. Since then the numbers of companies in the space has grown dramatically. Foursquare, however, is the first and only location company to receive MRC accreditation against those location-based advertising measurement guidelines, according to the company.

Gaining accreditation means that independent CPAs engaged by the MRC conducted a rigorous, thorough and in-depth audit to ensure Foursquare Visits complied with applicable industry standards set forth by the MRC, including MRC’s Location-Based Advertising Measurement Guidelines, and that a committee of industry practitioners reviewed and ultimately agreed with this assessment.

In addition to Foursquare Visits being available directly to customers or via major marketing tech platforms, it is also the foundation of multiple Foursquare products — including Placed powered by Foursquare, which has not been audited or accredited by the MRC. 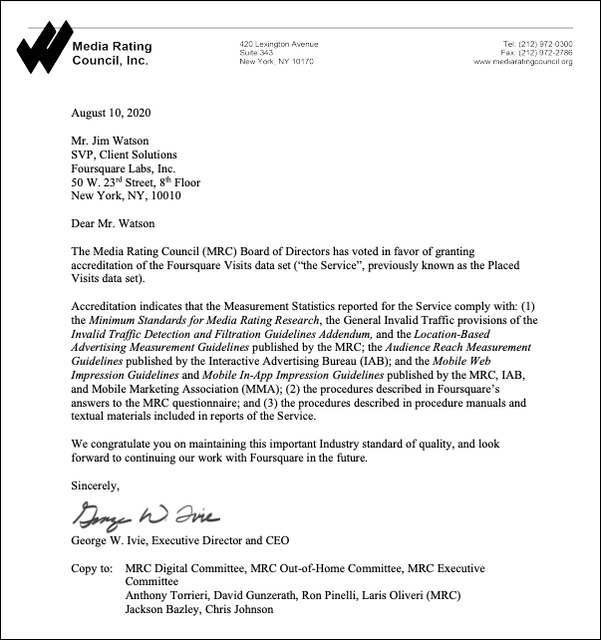