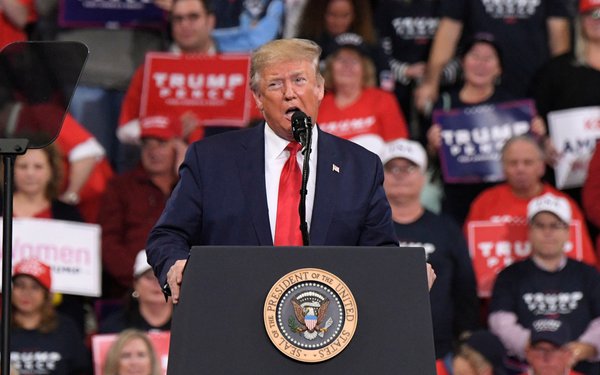 President Trump's campaign is urging a federal judge to dismiss claims that it violated a robotexting law, arguing that the law was unconstitutional when the messages were sent.

“The campaign cannot be held liable for violating a statute that was unconstitutional when it sent text messages during the 2015–2019 class period,” lawyers for the Trump campaign write in papers filed Friday with U.S. District Court Judge John Tunheim in Minnesota.

The argument comes in response to a lawsuit filed last year by cell phone users including Connor Olson and Shell Wheeler, who alleged they received unsolicited text messages from Trump's campaign.

They argue the messages were sent in violation of the federal Telephone Consumer Protection Act, which outlaws the use of autodialers to text people who haven't agreed to receive the messages.

Lawyers for the Trump campaign now contend that the lawsuit should be thrown out due to a Supreme Court decision issued in July. That ruling centered on a 2015 decision by Congress to amend the law by creating a new exception for robotexts and robocalls aimed at collecting debts owed to the government.

After that amendment was passed, the American Association of Political Consultants and other groups sued to invalidate the Telephone Consumer Protection Act on the grounds that the amendment violated the First Amendment. The groups urged the Supreme Court to strike down the entire law.

But the Trump campaign argues that the law was still unconstitutional before this July, because the decision to strike down the 2015 amendment was only “prospective.”

“The Supreme Court’s decision to prospectively sever the statute does not affect the retrospective liability of callers like the campaign who acted at the time the statute unconstitutionally restricted speech,” lawyers for the campaign write.

Three Supreme Court judges said in a plurality opinion that their decision “does not negate the liability of parties who made robocalls covered by the robocall restriction.”

But the Trump campaign argues that the statement, which appears in a footnote, “is neither controlling nor persuasive.”

Trump's 2016 presidential campaign was also sued for allegedly violating the robotexting law. That matter appears to have been settled for $200,000 in 2017, according to Politico.