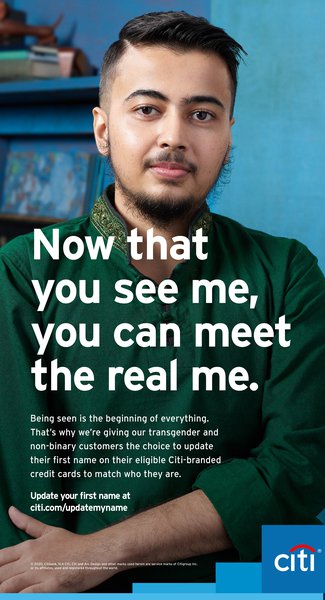 Citi is launching a marketing campaign to highlight that cardmembers are now able to use their chosen name on their eligible credit cards across the United States.

“At Citi, we are passionate about helping to ensure our customers feel recognized, accepted and empowered to be their true selves,” said Carla Hassan, Citi chief marketing officer, in a release.

Since introducing the True Name feature, the company has received “incredible feedback from our partners and allies within the transgender and non-binary communities on how the capability has eased a major pain point in their lives,” said Cheryl Guerin, executive vice president of marketing and communications for Mastercard, in a release.

In tandem with Transgender Awareness Week, Nov. 13-19, the campaign features real people from across the gender diversity spectrum, both in front of and behind the camera. Bianca Cline, a trans cinematographer, was the director of photography for the broadcast spots.

Transgender representation in advertising has been virtually nonexistent, with only 0.3% of advertising featuring transgender people for a community making up at least an estimated 1% of the population, according to a study.

This campaign aims to help the trans and non-binary community feel recognized, accepted and empowered, and is a meaningful extension of Citi’s commitment to advocating for LGBTQ+ equality, according to the company.

It is a lengthy and often times disheartening process to get a name and/or gender change on government IDs, says Asha Doucet, the trans actor starring in the TV ad.

“But the fact [that] Citi is allowing trans/non-binary people to get that validation and to feel seen by allowing name changes on their bank cards is amazing...Not much feels better than being acknowledged for who you are,” Doucet says in a release.

Transgender Awareness Week helps raise the visibility about transgender people and address issues members of the community face, according to GLAAD (formerly the Gay & Lesbian Alliance Against Defamation) a non-governmental media monitoring organization founded by LGBT people in the media.

Transgender Day of Remembrance, held annually on Nov. 20, is an annual observance on that honors the memory of the transgender people whose lives were lost in acts of anti-transgender violence that year.