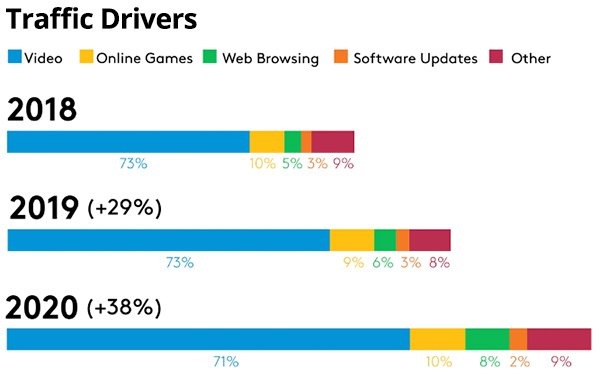 As the world reached the one-year anniversary of the global pandemic lockdown, Comcast 2020 traffic patterns reveal a sharp surge in March and April, followed by a transition into a typical, yet still elevated, growth spurt throughout most of the year.

The company this week released its 2020 performance network data. For the first time ever, Comcast customers generated more than a trillion Internet requests daily, meaning a request for data to transfer from one location to another, as in a search.

Peak Internet traffic rose 32% compared with pre-pandemic levels, and more than 50% in some markets during March 2020, compared with the prior year.

Despite increases in videoconferencing activity, entertainment activities continued to dominate network traffic, with video streaming accounting for 71% of all downstream traffic -- growing by 70% compared with 2019 levels.

Still, videoconferencing traffic only accounted for less than 5% of overall network use

During the span of four months during the COVID-19 pandemic lockdowns, Comcast’s network experienced nearly two years' worth of traffic growth.

Other key drivers of downstream traffic in 2020 were online gaming and the accompanying software downloads by 10%, while web browsing grew by 8%.

Comcast said it made more than $15 billion in investments since 2017, allowing its network to manage the demand driven by substantial growth in online video and gaming.

From 2017 through 2020, the company built an additional 39,153 route miles of fiber into the network, and made thousands of capacity augments from the core of its network to individual neighborhoods.