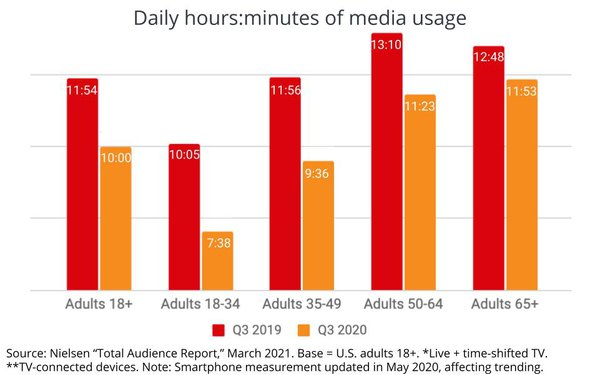 In a finding that appears to defy conventional wisdom -- not to mention many other media research studies -- Nielsen has released a new report this morning indicating the amount of time the average American spent using media each day actually declined precipitously at the height of the COVID-19 pandemic.

The finding, part of Nielsen's periodic "Total Audience Report" amalgamating most of the electronic media sources it measures in the U.S., shows the number of minutes of media used by the average American adult declined 16% to 600 in the third quarter of 2020, when the pandemic was surging, compared with 714 minutes daily during the same quarter in 2019.

Nielsen did offer one caveat, noting that it "enhanced" how it measures media usage on Android-based smartphones in May 2020 to "more precisely capture" how people use them to to access apps and the web as "intended behavior" vs. usage that's just happening in the "background."

"This has resulted in a significant decrease in smartphone duration on Android devices and a trend break from data prior to Q2 2020. However, while duration did decrease as a result of these changes, smartphone reach metrics remain unaffected," Nielsen Senior Vice President-Audience Insights Peter Katsingris explains in the report.

Nielsen's breakout for daily media usage by device type does indeed show a precipitous decline of 39% for smartphones, year-over-year, so the methodical change clearly had some impact.

But with the exception of connected TV devices (which showed an 18% gain) and computers connected to the internet (which had a 9% gain), all other media shown declined in daily U.S. adult minutes, including TV, radio and tablets. 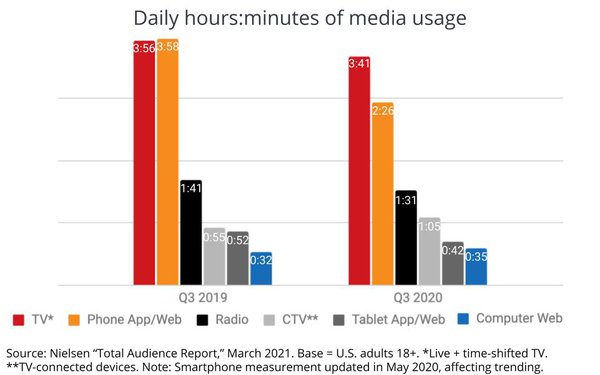